A proposed assault weapons ban cleared a House subcommittee Friday. This AK-47-style rifle, with a drum magazine that the owner said could hold more than 40 rounds, was carried it at the Jan. 20 pro-gun rally at the Capitol. (Ned Oliver/Virginia Mercury)

Yes, many of those who attended are undoubtedly law-abiding people sincere in their fervor about the Second Amendment.

Yes, the crowd shouldn’t be construed as solely a collection of fringe militia and white supremacist types.

However, in the feel-good aftermath that saw lawmakers shower police with (well-deserved) praise for their handling of what many feared could be a deadly tinderbox and Republicans heaping plaudits on “law-abiding gun owners,” a few observations raised some questions.

One: Many of the armed demonstrators roaming the streets outside the secure area were masked.

Two: Many were also carrying semi-automatic rifles with high-capacity magazines.

Both of these activities are restricted here by existing law.

It shall be unlawful for any person over 16 years of age to, with the intent to conceal his identity, wear any mask, hood or other device whereby a substantial portion of the face is hidden or covered so as to conceal the identity of the wearer, to be or appear in any public place.

There are exceptions (“traditional holiday costumes” and theatrical productions, protective masks for certain professions, etc.) but none that seem to apply to Monday’s gun rally.

Just one person was charged under the masking law, as the Mercury’s Graham Moomaw and other outlets reported Monday: a 21-year-old woman who, police said, refused to remove a bandanna. To charge her with a felony and not the many, many armed people brazenly covering their faces as they paraded through the streets of Richmond seems suspect.

And here’s what state code says about carrying certain weapons in the city of Richmond and other select localities (bold emphasis mine):

It shall be unlawful for any person to carry a loaded (a) semi-automatic center-fire rifle or pistol that expels single or multiple projectiles by action of an explosion of a combustible material and is equipped at the time of the offense with a magazine that will hold more than 20 rounds of ammunition or designed by the manufacturer to accommodate a silencer or equipped with a folding stock or (b) shotgun with a magazine that will hold more than seven rounds of the longest ammunition for which it is chambered on or about his person on any public street, road, alley, sidewalk, public right-of-way, or in any public park or any other place of whatever nature that is open to the public in the Cities of Alexandria, Chesapeake, Fairfax, Falls Church, Newport News, Norfolk, Richmond, or Virginia Beach or in the Counties of Arlington, Fairfax, Henrico, Loudoun, or Prince William.

The provisions of this section shall not apply to law-enforcement officers, licensed security guards, military personnel in the performance of their lawful duties, or any person having a valid concealed handgun permit or to any person actually engaged in lawful hunting or lawful recreational shooting activities at an established shooting range or shooting contest. Any person violating the provisions of this section shall be guilty of a Class 1 misdemeanor.

I asked the Capitol Police whether these laws were being enforced during the demonstration Monday. Here’s what I was told:

“Our goal is to maintain a safe environment in Capitol Square and throughout Richmond. All of today’s law enforcement partners are working toward that goal,” spokesman Joe Macenka replied.

Corinne Geller, spokeswoman for the Virginia State Police, said this: “Our response is in step with what Capitol Police and Richmond Police have already told you to these same questions.” 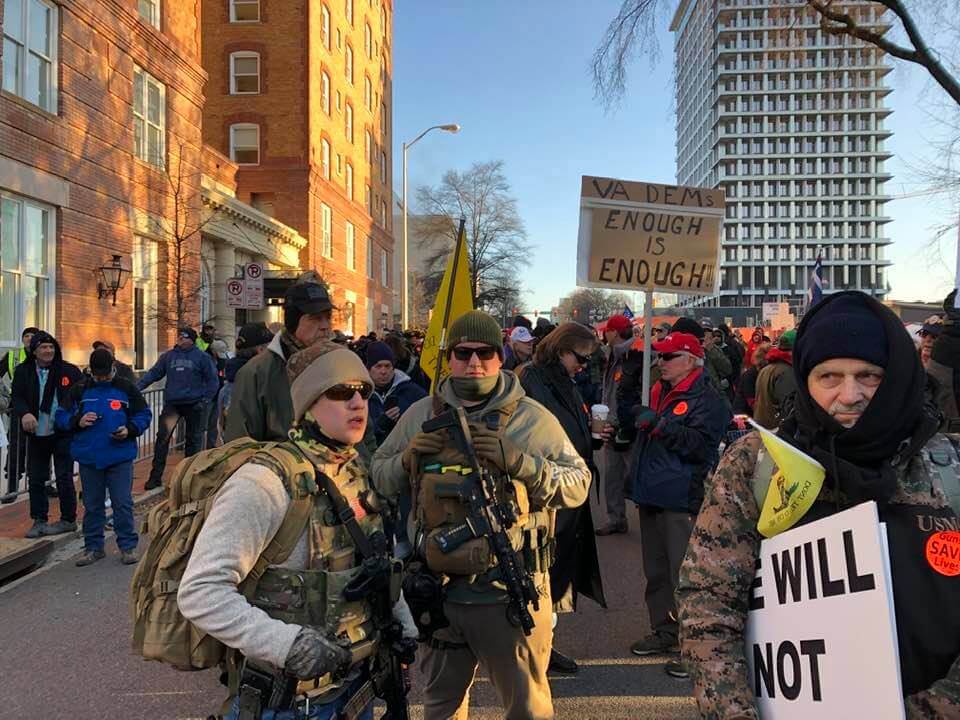 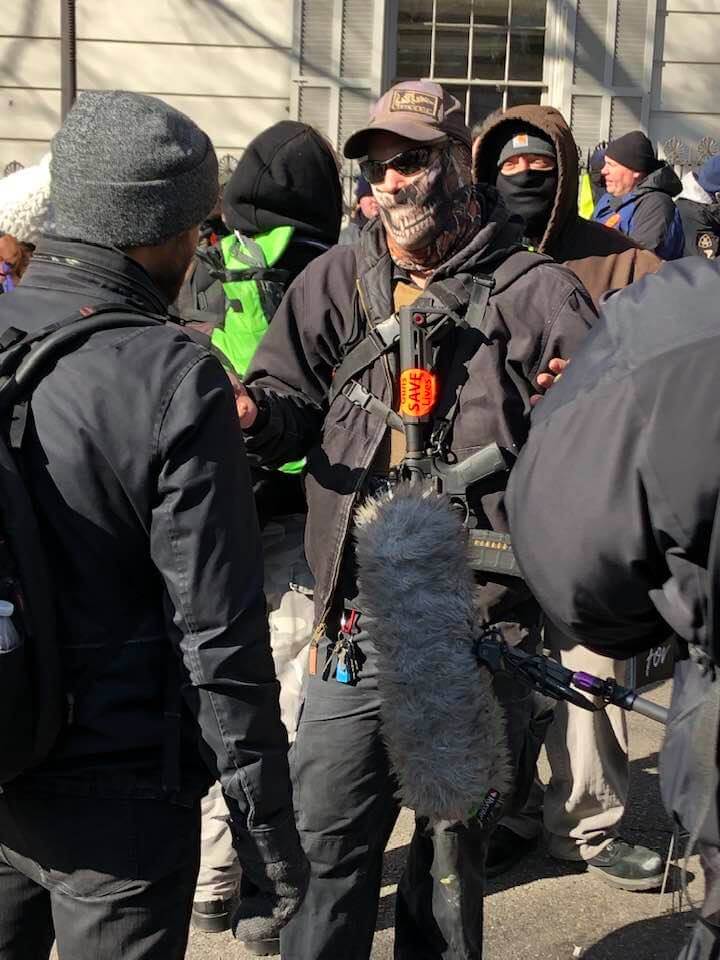 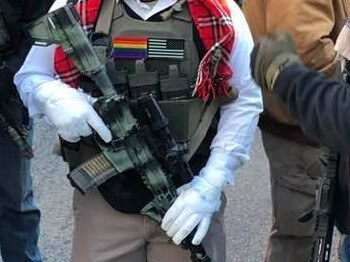 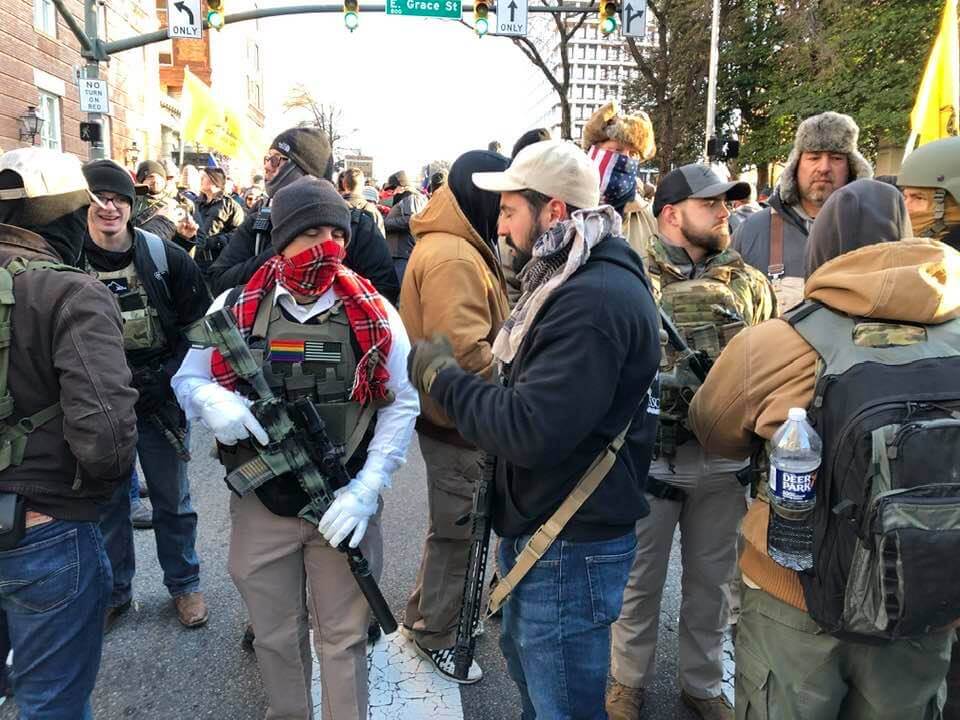 It’s hard to know how many of the thousands of people carrying weapons Monday might have run afoul of the law, since there’s an exemption for concealed carry permit holders and a requirement that the guns be loaded.

And it’s obvious how fraught police confronting armed demonstrators about their masks and inspecting individual weapons might be in the thick of the rally, where it’s easy to envision dangerous scenarios that could have unfolded had they started arresting or ticketing the “WE WILL NOT COMPLY” crowd. Believe me, I know the police agencies in charge of handling such an influx of armed people don’t want to hear any griping about what for them was a successfully managed event.

While I, like everyone else who lives or works in Downtown Richmond, am breathing a sigh of relief now, I’m also uneasy with the idea of Virginia laws falling by the wayside because the sheer number of people who may have been violating them (and the fact that they were carrying loaded guns) presented an insurmountable challenge.

Given the Second Amendment sanctuary movement that’s swept the state, the notion that it could be too dangerous to enforce some laws if there are enough armed people around doesn’t bode well.

Across cultural lines, home schooling has boomed since… by Jeff South January 3, 2022
In tight Virginia governor’s race, policy takes backseat to… by Graham Moomaw October 28, 2021
Can Southwest Virginia remake itself as a laboratory for… by Sarah Vogelsong September 20, 2021