A suite of LGBT-friendly legislation cleared the Virginia Senate on Tuesday.

The gay marriage ban has already been invalidated by a 2015 Supreme Court ruling and advocates said the state code should reflect that.

“Right now same-gender marriage is legal in Virginia as it is throughout the country, and the code of Virginia needs to have legal ambiguity removed,” said Sen. Adam Ebbin, D-Alexandria, who sponsored the measure and is the first openly gay person elected to the Virginia General Assembly.

The measure passed 25-13, with only Republican members opposing. Sen. Lionel Spruill, D-Chesapeake, was present but did not cast votes on any of the measures.

The ban on conversion therapy saw the most opposition among Republicans, with 18 members opposing and one, Sen. Jill Vogel, not voting.

“I think if we looked at 95 percent of it, we could all agree on it,” said Sen. Steve Newman, R-Lynchburg. “There has been some activity over the past decade that we’d all want to ban. That would include shock therapy and … some odd camping where they took people to camps to do some odd things.

The ban would only apply to minors and does not apply to non-health professionals such as religious leaders. It specifically excludes “counseling that provides acceptance, support and understanding of a person or facilitates a person’s coping, social support and identity exploration and development.”

Under her proposal, a person who transitioned genders would be able to get a new birth certificate reflecting their new identity. She said during a committee hearing last week that the change aims to address problems transgender residents sometimes face when key documents like drivers licenses and birth certificates don’t match.

The legislation requires “an affidavit provided by a health care provider from whom the person has received treatment stating that the person has undergone clinically appropriate treatment for the purpose of gender transition.” It does not require the person obtaining a new certificate to provide evidence they’ve undergone any related medical procedures.

The bill addressing school policies for transgender students directs the Board of Education to develop a model policy covering issues ranging from how students are identified and dress codes to prevention and responses to bullying and harassment.

School Boards around the state would be required to adopt “policies that are consistent with but may be more comprehensive than” the model policies by the beginning of the 2021-2022 school year.

All four pieces of legislation must now be adopted by the House of Delegates to make it to Gov. Ralph Northam’s desk. 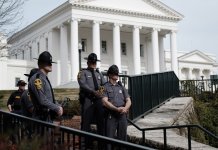