Gov. Ralph Northam’s office says he will push for legislation creating a process to replace a statue of Confederate Gen. Robert E. Lee in the National Statuary Hall Collection in the U.S. Capitol in Washington.

“This is something the governor and his team have been working on for several months,” said a spokeswoman for Northam, Alena Yarmosky. “The governor’s office has already filed a bill-drafting request for legislation addressing this topic.”

U.S. Reps. Don McEachin, D-Richmond, and Jennifer Wexton, D-Leesburg, wrote Northam a letter dated Dec. 20 asking him to make a statue to replace Lee part of his agenda for the 2020 General Assembly session that starts next month.

“As Virginians, we have a responsibility to not only learn from but also confront our history,” they wrote. “We must strive for a more complete telling of history by raising up the voice, stories and memories of minorities and people of color.”

Yarmosky said the governor’s office had previously discussed the statue with McEachin and Wexton “and we look forward to continuing to work with them and all others who are committed to making Virginia open, inclusive and equitable.”

The Lee statue in the U.S. Capitol was donated by Virginia in 1909. During that era, McEachin and Wexton said, such statues “aimed to rewrite Lee’s reputation from that of a cruel slave owner and Confederate general to portraying him as a kind man and reluctant war hero who selflessly served his home state of Virginia.”

They said the statue’s placement in the U.S. Capitol Crypt, “a prominent location that is displayed to almost every tour group that visits the U.S. Capitol,” serves as a “prevalent reminder of Virginia’s disturbing racial  legacy.”

“There are countless commendable Virginians who would better represent our Commonwealth in the U.S. Capitol than a Confederate general,” they wrote. The replacement process calls for authorizing legislation to be passed by the General Assembly and signed by the governor, then communicated to the office of the Architect of the Capitol, which is responsible for the buildings and grounds on Capitol Hill, the letter says.

Yarmosky said more details will be announced when the governor’s office rolls out Northam’s legislative agenda. 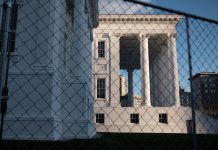 Virginia’s Capitol as a dystopian landscape braced for battle. How did it come to this?

On environment, lawmakers to grapple with everything from small fish to...