The company behind a controversial mega-landfill in Cumberland County has eliminated one of two cells from its plans, reducing the area where waste can be dumped by more than half.

The change “significantly reduces” the project’s impact on both wetlands and the surrounding communities, said Jay Smith, a spokesperson for the Green Ridge Recycling and Disposal Facility being planned by County Waste of Virginia.

The original proposal, which was approved in a mere 35 days by the Cumberland Board of Supervisors in June 2018, called for a 500- to 650-acre landfill on a 1,200-acre site. The disposal area was separated into an eastern and a western cell.

The newest plans, which were presented last week to the incoming Board of Supervisors that will take office in January, eliminate the eastern cell and cut the size of the disposal area to 240 acres.

Smith said that the decision to drop the eastern cell, which was slated to be developed after the western cell, was driven by the company’s desire to reduce its impacts. According to him, under the scaled-down plan, primary wetland impacts will drop from 3.38 acres to zero, while the number of houses within a half-mile of the landfill will decline from 58 to 37.

Despite the reduction in size, Smith said that neither the landfill’s planned lifespan of 30 years nor its projected revenue is expected to decrease. By redesigning the western cell to maximize capacity and using a more easily compacted synthetic foam rather than dirt as a daily cover, County Waste anticipates it will still be able to take in its permitted 3,500 to 5,000 daily tons of trash, while the tying of revenues to tonnage in the host agreement should also keep revenues stable.

The land previously allotted for the eastern cell “could be used as part of operations,” said Smith, “but for the most part it will serve as a nice buffer area between the disposal area and the homes on Miller Lane.”

Residents in both Cumberland and Powhatan have vigorously fought Green Ridge, which is sited about a mile from the border between the counties.

The issue quickly roped in politicians at all levels. Del. Delores McQuinn, D-Richmond, Sen. Glen Sturtevant, R-Chesterfield, and Del. Lee Ware, R-Powhatan, voiced concern about the landfill’s encroachment on possible African American burial grounds and the Pine Grove School, a historic Rosenwald school for African American children. Ghazala Hashmi, D-Richmond, early in her successful campaign against Sturtevant pledged to do “all that I can to stop the progress of this massive dump site that will make a literal wasteland of our rural community.”

And in Cumberland itself, November elections swept in an entirely new Board of Supervisors. Two incumbents were defeated, including Lloyd Banks of District 2, where the landfill is slated to be built. Banks had voted against Green Ridge but was criticized by some constituents as not actively fighting the proposal; he was decisively defeated by project opponent and political newcomer Ron Tavernier.

Asked about the changes to the Green Ridge plan, Tavernier said that “the elimination of the eastern cell alleviates pressures on Powhatan and Cumberland and takes the close proximity further from the county lines.”

Green Ridge still needs a waste permit from the Virginia Department of Environmental Quality before any construction can start. Smith said that County Waste anticipates it will file its application prior to the end of the year.

The waste management company also made headlines last week when it was announced that Canadian company GFL Environmental would acquire County Waste of Virginia and its subsidiaries, with the deal expected to close in January. 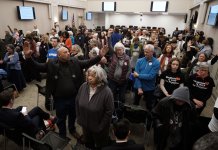 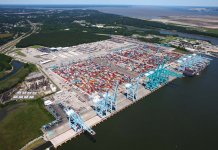 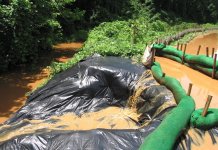