WASHINGTON — The U.S. Supreme Court appears unlikely to salvage an Obama-era program that has allowed hundreds of thousands of young, unauthorized immigrants known as “Dreamers” to remain in the country without immediate fear of deportation.

Lawyers defending the program — known as Deferred Action for Childhood Arrivals, or DACA — argued Tuesday that the Trump administration broke the law when it rescinded the program in 2017. Hundreds of protesters shared that sentiment Tuesday, chanting “Home is here!” and other pro-immigrant messages on the streets in front of the high court.

But the court’s conservatives seemed to disagree. During extended arguments in three consolidated cases, they seemed to endorse the legality of the administration’s decision to end the program and suggested that the question doesn’t even merit judicial scrutiny.

“I assume that was a very considered decision,” Justice Brett Kavanaugh, President Donald Trump’s most recent appointment to the bench, said of the decision to end it. “Now we can agree with it or disagree with the merits of it … but what is the shortfall?”

Even if the decision were illegal, the judicial branch couldn’t necessarily fix it, Chief Justice John Roberts said. “It’s not always the case when the government acts illegally in a way that affects other people that we go back and untangle all of the consequences of that.”

Justice Neil Gorsuch, Trump’s first appointee to the high court, struggled with the issue of “reviewability.”

“I hear a lot of facts, sympathetic facts … and they speak to all of us,” he said. “But what’s the limiting principle?”

The DACA program was created in 2012 to allow certain immigrants who arrived to the United States before age 16 to apply for temporary protection from deportation and work permits. There were roughly 661,000 active participants in the program as of June 30. Governing magazine estimated there were about 12,000 DACA recipients in Virginia as of 2017. The same year, there were an estimated 1,200 DACA students at Virginia colleges.

Trump vowed on the campaign trail to “end” what he has characterized as an illegal program. His administration made good on his promise in 2017, but lower courts blocked the decision from taking effect.

In June, the U.S. House passed legislation that would safeguard the program and provide a pathway to citizenship for Dreamers. But the bill is languishing in the GOP-controlled Senate, which is unlikely to act on it any time soon.

“We hope and pray that the courts will do the right thing,” House Speaker Nancy Pelosi (D-Calif.) said at a news conference after the arguments. She pointed to the bill passed by the House more than 160 days ago, which she pledged to drop off at the office of Senate Majority Leader Mitch McConnell (R-Ky.).

On Tuesday morning, Trump tweeted that President Barack Obama had “no legal right” to create the program but said he would make a deal with Democrats to allow DACA recipients to stay if the program is overturned.

Senate Minority Leader Chuck Schumer (D-N.Y.) accused Trump on Tuesday of playing politics with the Dreamers who rely on the program. “The president’s relentless scapegoating of immigrants is the most un-American thing I can think of,” Schumer said.

Justice Sonia Sotomayor, one of the court’s more liberal jurists, called the program legal during arguments Tuesday and said she supports its efforts to defer deportation of Dreamers — more than 90 percent of whom are employed and nearly half of whom are in school, according to a 2017 survey.

Such law-abiding immigrants and their families rely on the program, she said. Trump, meanwhile, has said he would protect DACA recipients but he hasn’t — an as-yet empty promise that she said must be considered when ruling on the case. “This is about our choice to destroy lives.”

But Gorsuch and others suggested that the administration has adequately considered such “reliance interests.”

A ruling in favor of the Trump administration would not necessarily result in the immediate deportation of these so-called Dreamers, according to Steven Schwinn, a law professor at the University of Illinois at Chicago. But it would threaten their ability to live in the United States and would deprive them of legal authorization to work and to access certain social benefits.

The ruling — expected next spring or summer — will also likely inflame partisan divisions over immigration and could influence the outcome of the 2020 presidential contest. A majority of the public backs the DACA program, polls show, though support is stronger among Democrats and Independents than Republicans.

Sen. Tim Kaine, a Virginia Democrat who talked with protesters outside of the Supreme Court on Tuesday morning, blasted the president and his immigration policies.

Kaine pointed to legislation that attempted to address the DACA program but failed in the Senate in February 2018.

“The president basically broke his promise to Dreamers and decided even if he got border security he wasn’t going to do anything for Dreamers,” Kaine said. And as soon as he came out against the deal, the other Republicans all bailed. Now, we have very little chance of getting Republicans because they’re afraid of crossing the president. That’s unfortunate.”

Kaine said he doesn’t expect Trump to support any relief for Dreamers while he’s in office.

“Look at what he’s tweeting about Dreamers today, that they’re no angels, that they’re dangerous. As a candidate, he was saying ‘Dreamers are great kids, Dreamers won’t have anything to fear in me,'” Kaine said. “As recently as February 2018, [Trump] said, you do a deal for Dreamers, whatever you put on my desk, he’ll sign. But that was cheap words. The president has really shown what’s in his heart, and what’s in his heart is complete opposition to immigrants.” 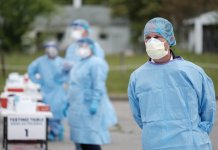