Virginia is almost certain to become the 38th and final state to ratify the Equal Rights Amendment when the General Assembly convenes in January.

Incoming Democratic leaders, who will hold majorities in both chambers of the General Assembly, have offered repeated and unequivocal promises to pass the measure.

What happens after that, however, is unclear and experts on all sides of the debate say the only certainty is a complex legal battle that might never be resolved.

“It’s going to be like the Wild West of the Constitution in January 2020, where it’s kind of a lawless land and no one knows what the precedent is,” said Kate Kelly, a human rights attorney at Equality Now, which backs the measure.

First proposed in 1923, the Equal Rights Amendment would bar discrimination on account of sex. Advocates argue it will bolster legal protections for pay equity, educational opportunities and health care – areas where courts have interpreted the 14th Amendment to provide some protections, but not to the same standard as other protected categories, such as race.

“This is a monumental shift in the American Constitution, because, remember, when our Constitution was written, women were chattel,” said Kati Hornung, who is leading the campaign for ratification in Virginia.

The uncertainty surrounding what happens after Virginia ratifies stems from the deadline Congress set when it first voted to send the amendment to the states in 1972.

When it expired in 1982, only 35 states had ratified it – three short of the three fourths required for it to be included in the Constitution as the 28th Amendment.

It was widely understood to be dead until the mid-‘90s, when the 27th Amendment was ratified – an uncontroversial measure dealing with congressional pay that had first been proposed in 1789 by James Madison.

ERA supporters argued that the 200-year gap between its proposal and final ratification means the ERA is still valid.

“Forty years is not 200 years, so I think there is a pretty good argument that this type of deadline should not get in the way of equality,” Kelly, with Equality Now, said.

But the 27th Amendment never had a deadline attached to it.

Anticipating Virginia’s forthcoming vote on the amendment, congressional leaders in the House of Representatives are preparing legislation to extend the deadline. It’s likely to pass the House, but faces an uncertain (and likely more perilous) fate in the GOP-controlled Senate.

With or without an extension, the measure is sure to face legal challenge.

Another complicating factor: Five states that once ratified the measure have since voted to rescind that ratification. Can they do that? Unclear. When Ohio rescinded its ratification of the 14th Amendment, everyone ignored their decision and attached it to the Constitution anyway.

But on the ERA, a district court judge in Idaho said the state’s effort to back out was valid. The Supreme Court was going to hear the case, but dismissed it once the deadline expired, calling it moot.

At the center of it all: a man with a library science degree

So who is tasked with sorting all this out?

Initially, at least, it will be up to a man with a library science degree: the archivist of the United States, David Ferriero.

After both chambers of the legislature ratify the amendment here (no signature from the governor is required), either the clerk of the House of Delegates or the Senate will transmit proof of ratification to the U.S. Archives, where Ferriero is tasked with certifying whether the amendment is valid and, if so, publishing that certification in the Federal Register.

Experts say it’s likely Ferriero will rely on legal advice from the Justice Department, and that whatever his decision, legal challenges from either advocates or opponents will follow.

But the courts may never make a determination one way or the other, especially if they decide the amendment doesn’t extend legal protections beyond those provided under current interpretations of the 14th Amendment, argues Saikrishna Prakash, a law professor at the University of Virginia who has studied and written about the issue.

And in either case, he notes the Constitution is silent as to who decides whether an amendment has been properly ratified. (He likens the archivist’s role to that of a scorekeeper in a baseball game where it’s never been established who the umpire is.)

He says that while he personally supports the ERA, he believes the timeframe for ratification has clearly lapsed. But he also argues the 27th Amendment was improperly ratified and that made it into the Constitution.

In the most extreme possible outcome, he imagines a future where supporters of the amendment refer to copies of the Constitution that contain the ERA and opponents keep their own copies that exclude it.

Virginia’s May elections might be scrapped. People are still voting in them anyway. 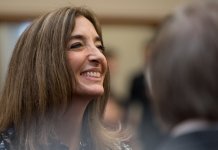