Voting may be over and Democrats appear to have captured majorities in the House and Senate, but that doesn’t mean Virginia has official election winners yet.

That will be formally declared Nov. 18, when the state Board of Elections certifies all elections. Before that, local elected officials need to count write-in votes and deal with any recounts.

So what happens between now and certification? First comes the canvass.

Local elections officials, led by the general registrar, will meet today to tally votes. That count can last until Nov. 12, the last day for people who had to vote with a provisional ballot because of voter I.D. issues to provide an I.D.

This year, the canvass might take longer in some places because of write-ins.

The most famous write-in campaign this year was carried out by Del. Nick Freitas, R-Culpeper, who missed a deadline on his paperwork and didn’t make the ballot. Freitas appears to have kept his seat.

Another write-in campaign, mounted by supporters of ousted GOP Del. Chris Peace of Hanover, who lost his primary to Republican Scott Wyatt in a bitter and contested process, appears to have fallen short.

Write-in options are only counted if they add up to 10% of the total votes cast. In some local races this year, there are no candidates running so write-ins have to be looked at one-by-one no matter what.

Electoral boards will have to go through write-in entries and decide which variations of names count as a vote for a specific person. That count could last as long as the canvass, which is open to the public and political observers.

Once the count is done and if things seem a little too close to call, candidates can ask for a recount.

Right now, at least four races across the state appear to be within the margins for a recount. In Virginia Beach, Republican Del. Chris Stolle, who trailed Democrat Nancy Guy, and Democratic senate candidate Cheryl Turpin, who appears to have come up a few hundred votes short in her race with Republican Jen Kiggans, may be able to ask for recounts. Turpin’s campaign said it’s too early to know if she will pursue a recount. Stolle, who could not be reached by the Mercury for comment, told The Virginian-Pilot he was “confident” he would win in a recount.

Near Emporia, Republican candidate Otto Wachsmann said he would be waiting for the local canvass to end before deciding on whether to pursue a recount in his race against Del. Roslyn Tyler. Democrat Larry Barnett in Chesterfield said he was doing the same in the contest with Republican Del. Roxann Robinson.

Virginia doesn’t have automatic recounts and there are certain conditions that have to be met before an apparent loser is granted one.

The difference in the number of votes cast for the winner and loser must be less than 1% of the total. General Assembly candidates must notify the clerk of their respective chamber for a recount and it has to be after the Board of Elections has certified the results from Election Day.

Recounts in races with write-in candidates have one main difference: The difference between the apparent winner and loser can be up to 5% of total votes.

For referendums and bonds (of which there were 20 such questions in 13 localities across the state this year), the difference between votes has to be less than 50 or less than 1% of the total votes cast- whichever is a bigger number.

Then, 50 people qualified to vote on the referendum may petition for a recount.

In elections involving people, the recount doesn’t cost the person money if the difference between the two candidates is half a percent or less. Localities will pay for local races and the state would pay for House of Delegates or State Senate races.

If the difference is between half a percent to 1%, the candidate requesting the new count has to pay.

The cost of that process depends on several factors, including voter turnout and the size of the locality, said Chris Piper, commissioner of elections.

And if that ends in a tie, Virginia’s infamous bowl could make a reappearance and the winner will be determined by drawing, like Newport News’ 94th District race in 2017.

In that race, anyway, the bowl won’t be necessary since Democrat Shelly Simonds apparently cruised to victory over incumbent Republican Del. David Yancey. 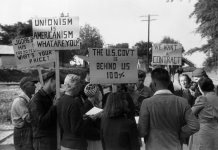 Virginia Explained: The growing debate (and divide) on right to work