Ardine Williams, Amazon’s vice president of workforce development, said the listening session is just one of “lots” to be held around Virginia’s different regions. Williams, Brian Moore, Amazon’s senior manager for public policy, and Laurie Tyson, manager of public policy for Amazon’s Web Services, didn’t speak much but took notes during the meeting.

The conversation, which also included members of Northam’s cabinet and staff, functioned both as victory lap and a way to showcase southwestern Virginia as an investment opportunity and potential source of employees in the future, whether they emigrate to Northern Virginia or work remotely.

In a news release, Northam said Amazon’s investment in Virginia, including its new $2.5 billion headquarters Northern Virginia, “can benefit every part of the state. Southwest Virginia has strong communities, a skilled workforce and visionary leadership, and I’m pleased to have the opportunity to discuss with local leaders how we can attract more jobs and investment to this important region.”

Northam touted Virginia’s 2.7% unemployment rate but said each region has varying challenges. In National Landing, where Amazon will build a new campus and Virginia Tech will build a supporting Innovation Campus, Northam said, companies are competing for talent. In rural areas, such as his home turf on the Eastern Shore and in southwestern Virginia, talented people are competing for jobs.

“That’s what we need to focus on,” Northam said. Then he turned to the group of about 30 people, which included officials from the legislature, economic development agencies, higher education, philanthropy, business, and other sectors. “We’ll take your ideas back to Richmond and at the end of the day turn them into jobs,” Northam said.

Much of the conversation was directed toward education and workforce development, as part of Virginia’s commitment to produce 25,000 to 35,000 new graduates with degrees in computer science and related fields over the next two decades.

“If you look at the test scores of your students, Amazon needs to hear, there are smart people here in Southwest Virginia,” Northam said.

Del. Terry Kilgore, R-Scott County, bragged that the region stands atop the state in Standards of Learning.

“I remember when we passed SOLs, people down here were saying rural Virginia will never be able to keep up,” Kilgore said. “We have been able to keep up, but we lose a lot of these kids. They go to UVA or Virginia Tech and we never get them back. We have the education, and all those building blocks in place here. We just need a little help to keep them here.”

Dario Marquez of Wize Solutions said he thinks that Amazon’s presence in Virginia could benefit small businesses that might play supporting roles.

“We think all the ingredients are here,” Marquez said. “You have a macro strategy — attracting Amazon — and a micro strategy, where Amazon needs small businesses and suppliers. You’re doing that.”

“I believe today was good,” O’Quinn said after the meeting. “They got to see a real cross section, all the things going on that we’ve put in place, all the partnerships we’ve been working hard to make. I believe it was time well spent.”

The visit to the Spearhead Trails built on the discussion, spotlighting southwestern Virginia’s growing outdoor recreation industry, which is fueling a number of small businesses in St. Paul.

As she headed out the door to follow the governor to the Spearhead Trail, Amazon’s Williams cited the region’s partnerships as her primary takeaway from the meeting.

“I think what i heard today is phenomenal collaboration — great work not only at the state and local legislative level, but also the counties and local jurisdictions, from pre-K all the way to the college level — creating a skilled workforce,” Williams said. 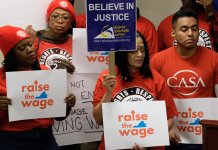