CHRISTIANSBURG — The stark black-and-white sign stands out, even amid the campaign cavalcade of color that, along with the changing leaves, marks October in Virginia.

It’s not the absence of the traditional red or blue that grabs the eye so much as the wording: “Elect Dr. Mark J. Matney — Trump Republican for Commissioner of Revenue.”

Since Donald Trump spiked margins for Republicans three years ago, the Queens, New York-born mogul and media personality has reshaped the GOP in his image. It’s no different in Southwest Virginia, where Trump consistently won three-quarters of the vote or more. In Washington County, 74.7% of voters cast a ballot for Trump — and it’s not even in the top 10 Trumpiest localities in the region.

The partisan entrenchment at the federal and state levels is part of a larger realignment that’s played out over decades, but which accelerated with the 2008 election of Barack Obama as president. Rural parts of the state swung hard toward Republicans, pushing out longtime Democrats like U.S. Rep. Rick Boucher, who represented southwestern Virginia’s 9th district in Congress for 28 years.

Trump’s 2016 election solidified that shift, while also triggering its own backlash as suburban Virginia districts went more Democratic in 2017 and 2018.

Now, Trump is starting to appear prominently in state and local elections.

In the Republican primary in the 4th House District, Russell County supervisor David “Peanut” Eaton leaned heavily on Trump imagery in his campaign to win the nomination for the seat left open by Del. Todd Pillion, who is running for the 40th Senate District. Eaton’s billboard in Abingdon showed him alongside a smiling Trump, and Trump also appeared in a campaign ad targeting his primary opponent, Abingdon lawyer and third-generation politician William Wampler III.

After Wampler defeated him 64.5% to 35.5%, Eaton, who did not respond to interview requests, pivoted to run for re-election to the Russell County Board of Supervisors. And his campaign’s Facebook page has not mentioned Trump since.

It’s a different story in Washington County, where Matney is running a general election campaign on the president’s name. In fact, Matney faced no primary opponent and instead jumped straight to the general election.

So why is Matney making Trump such a prominent part of his campaign?

First, Matney said he wanted to show “my commitment to the president, and I wanted to show the people I am wholeheartedly 100% behind our president.” But, he quickly acknowledged, “it’s a campaign strategy of course.”

“Here’s the thing,” Matney said. “David Henry beat those other three Republicans pretty handily. But Bill Gibson ran last time, and he went out and put his signs up and said, ‘I’m Bill Gibson.’ And David Henry said, ‘I’m David Henry.’ I’m running that I’m a Republican, and he’s the Democrat. He’s never had anyone come at him with the fact that he’s a Democrat.”

The margins that Trump spiked in some localities in 2016 are creating an incentive for a candidate like Matney to run under the banner of the president. The longer-term effect of that dynamic remains unclear. As the de facto head of a political party, presidents can reshape those parties. Congressional Republicans already have shifted on some long-held political positions under Trump for fear of angering their base.

“The question to me is, has Trump re-oriented the Republican Party into something different than it was?” said Greg Habeeb, a Republican who served nearly eight years in the House of Delegates representing the 8th District, which includes parts of Roanoke, Craig and Montgomery counties and Salem city. He resigned last year to spend more time with his family and expand Gentry Locke Attorneys presence in Richmond.

“The power of presidency allows you to reform institutions the way you want them to be,” Habeeb said. “The question becomes whether those differences become the new Republican Party, the grassroots, or if they are an exception in time. People acting against traditional behaviors one time is an exception; enough times and it becomes (who) you are. ”

Virginia’s local elections have often resisted partisan patterns, in part because those constitutional offices have nothing to do with national or even state-level political issues. The responsibilities of commissioners of the revenue vary by locality, but the official generally administers local taxes, implementing local ordinances and conducting tax assessments.

By explicitly running as a “Trump Republican,” Matney hopes to nationalize a race that otherwise has little to do with party labels.

“That’s why my campaign slogan is, ‘Go vote or Democrats win,’” Matney said. “Whether I win or not, and it’s a tough climb to beat an incumbent, I want everyone who goes into that booth to know they’re voting for a Democrat or a Republican.”

Does that mean Matney would change how he goes about doing the job of commissioner of the revenue?

“Absolutely not,” Matney said. “If you ask me who Mark Matney is, the first thing that comes out of my mouth is, ‘I am a Christian.’ I would not go into the office and deal with anybody as a Republican or Democrat. I’m going to deal with them as a Christian and present myself as a someone who will go by the rules and try to help anybody any way I can.”

All of this irks incumbent Henry.

“I expected it, because that’s all this man has, is the possibility of riding into office on someone else’s coattails,” Henry said. “He’s never spent a day learning about county government, let alone the 12 years that I spent before I thought I was even somewhat ready to run for office. He’s hoping to get a nice job being a public servant by bringing hatred and national politics into a local campaign. So I don’t blame him for using the Trump Republican sign, because that’s really all he’s got.”

Henry grew up in Washington County and first worked in a county revenue job in college, when he spent Christmas and spring breaks helping in the treasurer’s office. He went to work full-time for the treasurer in 1996 and continued for eight years before switching to the commissioner’s office. When incumbent commissioner Melvin Ritchie decided to not to run for re-election in 2007, Henry entered the race.

Henry said that because his bosses in the treasurer’s and commissioner of revenue’s offices had been Democrats, he ran as one too. He won a five-way primary for the Democratic nomination in 2007, and he’s won between 56% and 59% in every general election since.

“One of my grandfathers was a coal miner and a Democrat, and the other was a deputy sheriff and a Republican,” Henry said. “I’m not a liberal. I’m not ultra right wing. I’m a moderate person. I grew up in a home where my parents voted for the best person. Many times that was Democrats, and many times it was Republicans.”

Instead of party label, Henry is running largely on what’s he’s done his previous three terms. He cites a record of clean audits, as well as giving $100,000 in unused budget money back to the county since taking office.

“Never one time has my opponent said anything he’d do different or better in this office,” Henry said. “He’s saying every Democrat needs to go out of office, and that’s all he can say.”

Matney grew up in Grundy, Virginia. He obtained degrees from regional universities and in 2017 obtained his doctorate degree in educational and organizational leadership from Nova Southeastern University — which provided the “Dr.” in his campaign sign. He worked in business and in school systems.

In fact, Matney was so busy hawking Trump merch (on behalf of the local Republican party) that he missed seeing the future president when he campaigned in Abingdon in 2016. Matney was there—he was just out in the parking lot selling gear.

Voters will decide on Nov. 5 whether Matney is as successful a Trump Republican as a candidate as he has been a vendor.

Clarification: This article has been edited to clarify that Matney was selling Trump merchandise on behalf of the local Republican party. 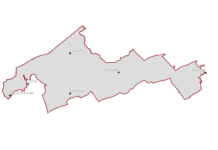 Another 38 special: inside the intense battle for a reliably red Virginia senate seat 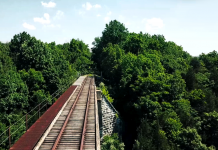 In Southwest Virginia, a ‘Trump Republican’ seeks a local office

‘The party needs to have a tough conversation’: Republicans play catch-up...