Rep. Don McEachin, D-Richmond, issued a separate statement joining calls for impeachment late Tuesday morning, leaving Rep. Bobby Scott, D-Newport News, as the only Democratic member of the Virginia delegation who has not voiced support for an inquiry.

Luria and Spanberger published an op-ed late Monday in The Washington Post with the five other members, all of whom have national security backgrounds, criticizing reports that Trump may have used his position to pressure the Ukraine into investigating his political opponent, former Vice President Joe Biden. All are in red-leaning districts and all but one had up until now resisted calls for impeachment.

Trump ordered his administration to hold back nearly $400 in military aid to Ukraine just before a July phone call in which Trump reportedly pressured Ukranian President Volodymyr Zelensky investigate Biden’s son, the Post reported. Trump has said he didn’t threaten to withhold military aid if Ukraine didn’t pursue the investigation.

The House Democrats called the allegations “stunning, both in the national security threat they pose and the potential corruption they represent.”

They continued, “This flagrant disregard for the law cannot stand. To uphold and defend our Constitution, Congress must determine whether the president was indeed willing to use his power and withhold security assistance funds to persuade a foreign country to assist him in an upcoming election.

“If these allegations are true, we believe these actions represent an impeachable offense,” they wrote.

The op-ed comes amid a growing appetite for impeachment among Democratic lawmakers who have been previously reluctant to make such calls.

“I don’t think the House should move on anything until there is any level of substantial evidence that would provide a strong rationale for us to take action,” Spanberger told the Virginia Mercury in a January interview.

McEachin said in his statement that “to look the other way is an abrogation of my oath, my duty, and my responsibility.”

Trump appeared to confirm over the weekend that he had discussed former vice president Biden during the call and accused him of corruption linked to his son’s business activity in the Ukraine, The New York Times reported. The details of the conversation are reportedly part of a whistleblower complaint that Democrats want released to Congress.

House Democrats have announced a hearing Thursday where Acting Director of National Intelligence Joseph Maguire is slated to testify before the House Intelligence Committee. House Speaker Nancy Pelosi (D-Calif.) said in a letter to her colleagues that she expects him to turn over the whistleblower’s full complaint.

“If the Administration persists in blocking this whistleblower from disclosing to Congress a serious possible breach of constitutional duties by the President, they will be entering a grave new chapter of lawlessness which will take us into a whole new stage of investigation,” said Pelosi.

Senate Minority Leader Chuck Schumer (D-N.Y.) on Monday urged the Senate’s GOP leaders to convene hearings on the matter, to issue a subpoena to compel the delivery of the complaint to Congress and to request that the White House release the transcript of Trump’s call.

“It is the Senate’s duty — duty — to take this national security matter seriously and to investigate now,” Schumer said.

McConnell said that Senate Intelligence Committee Chairman Richard Burr (R-N.C.) was “working to get the intelligence community’s inspector general before the committee this week to discuss the matter,” the Hill reported. 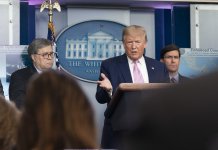