Over the last five years, Jimmy Trujillo’s stepdaughter has moved through elementary and middle school in Richmond with average grades but below-average and stagnating English skills.

His daughter, now in high school, can only read, write and speak a handful of English words, according to her standardized language test results.

Without a better grasp of the English language, Trujillo knows his daughter’s chances of graduating are low.

The family’s experience is one of the most pressing concerns for schools with large and ever-growing populations of Hispanic and Latino students: accessing English-language education and navigating an unfamiliar system complicated by language barriers.

In schools with large populations of Latino and Hispanic students that dynamic is especially apparent: Students and parents might not know how to ask for language services, impacting students’ success.

E.S.H. Greene Elementary in Richmond, where Trujillo was PTA president, has a student body that is 86 percent Hispanic, the highest concentration of Latino students in the state.

Eleven schools in Virginia have student bodies that are more than 75 percent Latino or Hispanic, the threshold the U.S. Government Accountability Office’s uses to define segregation. Greene Elementary is the only one outside of Northern Virginia.

“The same things that happen at black schools happen at Latino schools,” said Patricia Gandara, a researcher at UCLA’s Civil Rights Center, which studied school segregation in Virginia in 2013.

“Generally the school is much, much poorer and they have little access to opportunities. Parents are usually immigrants so parents can’t navigate the school system and no one knows because they’re all in the same boat.”

“Hispanic” refers to people of Spanish-speaking origin. “Latino” refers to geographical origin — from Latin-American countries. Some people interviewed for this story use the terms interchangeably, as has the U.S. Department of Education.

Most of Virginia’s school systems are no longer under racial desegregation orders (Suffolk has an outstanding order). Recent federal orders in the state have focused on English-learning services, a resource most commonly used by Spanish-speaking students.

Trujillo, who moved to the United States 21 years ago from Colombia, said it’s hard to get the Richmond school system to listen to Latino families. He’s become a de facto representative for most of Richmond’s Latino and Hispanic families because many don’t know English or worry that a school official will report them to federal authorities because of their immigration status, Trujillo said.

“My community doesn’t have a voice. They don’t listen to us. We don’t get nothing. Nothing. My fight isn’t only for Greene, it’s for Boushall, it’s for Reid, it’s for Wythe,” Trujillo said, listing Richmond schools that have large concentrations of Hispanic students.

In Richmond, a citywide school rezoning process would redraw some boundaries for schools with the highest Hispanic populations, mostly in an effort to ease overcrowding. In some of the options, the reconfiguration would cut the percentage of Hispanic students at one school in half.

School leaders may want to keep a “critical mass” of Latino and Hispanic students in one school to respect natural communities and make sure short-staffed districts can get an appropriate number of specialized teachers assigned to students, Gandara said.

“Research isn’t totally clear on this …  but in places where you have more of these children, the districts are able to serve the kids better if they have a limited number of bilingual teachers or people trained for English-learners,” she said.

Gary Orfield, another researcher at the UCLA Civil Rights Center, said segregation of Latino students has been increasing since the 1970s, mirroring the growth of the Latino population.

‘There were a lot of students who fell through the cracks’

Even though only one of the schools with the highest concentration of Hispanic students in the state is in Richmond, the district has had notable challenges with English-learning services.

Of school systems that reported dropout data for student demographic groups, Richmond’s Hispanic students have the third-highest dropout rate in the state (60%), behind all of Richmond’s students learning or who have recently learned English (65%) and Fredericksburg English-learners (66%).

Jennifer Blackwell, the current English-learning specialist for Richmond schools and a former counselor at Huguenot High School in the city, acknowledged system-wide shortfalls for English-learners.

“Richmond is a unique situation because we had our big boom of immigrants come in 2015 and with that the district was completely unprepared,” she said. “There were a lot of students who fell through the cracks so we are definitely still feeling the effects of all of that.”

This school year, Richmond officials didn’t count 800 English-learning students, meaning the state didn’t give the city funding for additional teaching positions. The city will have to find money to fund those positions unless the state is willing to adjust its budget.

That doesn’t mean students aren’t receiving English-learning services, Blackwell said, but it could be better with more teachers.

At the end of last school year, Richmond had 3,051 students who required English-learning services. The school district has 48 English-as-a-second-language teachers and are hiring for three more, Blackwell said.

If all three positions are filled, it fulfills the state’s Standards of Quality, which require 17 ESL teachers for every 1,000 ESL students.

It’s not clear if the complaints were filed by a Spanish-speaking family. Those details are confidential.

In Arlington, Spanish-speakers make up most of the students learning English, but the district also has large numbers of students who speak Arabic and Mongolian, said district spokesperson Frank Bellavia.

Arlington agreed to a number of changes after a complaint was filed, including properly identifying English learners, training middle school teachers so English learners can understand content and properly monitoring the effectiveness of English learning programming over time.

Arlington already offers most of their parent information programs in Spanish and have started using the WhatsApp messaging app to share information with Spanish-speaking families (the app is particularly popular among Spanish speakers).

Prince William County agreed to similar actions, according to the settlement agreement.

“Students are resilient,” Bellavia said. “For parents, anytime you move to a new country, the institutions are difficult because they’re different. The idea of going into a government building or school is intimidating if you don’t have a strong command of the language.” 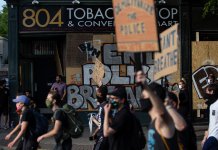