Sooner or later, this was bound to happen.

When Virginia’s own Ken Cuccinelli — the former attorney general famous for attempting to prosecute climate change research, covering up Virtus’ bareness, suing to overturn Obamacare, defending anti-sodomy laws and other conservative windmill-tilting that even rolled the eyes of many a Republican here — joined the Trump administration as a top immigration official, it was only a matter of time before he stepped in it.

This week, the inevitable occurred, when Cuccinelli observed to NPR that “The New Colossus,” the famous poem on the Statue of Liberty about the wretched refuse of teeming shores and huddled masses yearning to breath free, really meant: “Give me your tired and your poor who can stand on their own two feet and who will not become a public charge.”

Later, on CNN, he made things worse.

“That poem was referrring back to people coming from Europe where they had class-based societies, where people were considered wretched if they weren’t in the right class,” Cuccinelli told a coiled-and-ready-to-strike Erin Burnett in a wholly uneccessary detour, a product of his penchant for pedantry that blew up in his face.

He attempted to go on to explain that the public charge rule, which had been part of U.S. immigration policy for years prior, was expanded in 1903, the same year the “Colossus” poem was inscribed on the Statue of Liberty.

But after his comments were sucked into the social media machine, where outrage never sleeps, the takeaway was this:

Looks like they had a meeting and decided to make racism the main theme of the re-elect. https://t.co/59wzteNoY9

Ken Cuccinelli just gave the game away. Racism is the point of their policy. https://t.co/glTn6BO01J

So long as we're accepting updates to the Statue of Liberty poem, I have one:

Give me your tired, your poor.

And in exchange, we will give you Ken Cuccinelli

Ouch.  It’s an awkward spot for the Cooch to be in for sure, defending policies from a president he fought to keep off the ballot. He had also sought recently to refashion himself as something of a bi-partisan reformer, lending his, um, name recognition to a push to break Dominion Energy and Appalachian Power’s chokehold on Virginia electric customers.

But, unfortunately, it’s also no surprise that Cuccinelli would be out front on a draconian policy that would penalize legal immigrants who avail themselves of public benefits, a needlessly cruel move that, when taken with this administration’s demonization of the other and persecution of desperate asylum seekers, sure looks like they only want a certain kind of immigrant in this country.

Since his elevation to his new federal post, Cuccinelli’s past remarks likening rat control to immigration policy have also been thrust back into the spotlight, a callous and cavalier comparison that underscore his true hardline immigration stance.

Which is sad and hypocritical, because, once upon a time, government officials in this country officially concluded that “certain kinds of criminality are inherent” in people with names like Cuccinelli’s and mine.

And though many Italian-American families like to tell themselves their ancestors came over legally, worked hard and became model citizens right away, that, of course, wasn’t always the reality. It certainly wasn’t in the case of some of my relatives.

I said it last year, as the president outrageously, cynically and shamelessly stoked fears about migrants in the run-up to the midterms, and I’ll say it again: The descendants of immigrants who came here looking for a better life should be the first to champion a humane, thoughtful and inclusive immigration policy.

Sadly, too many of the children, grandchildren and great-grandchildren of the Irish, Italian, Polish, Slovak, Hungarian and other European immigrants who were subjected to prejudice and abuse when they arrived in droves on these shores seem to favor drawing up the ladder behind them.

I would be remiss, though, if I didn’t point out that Cuccinelli was not the only prominent Italian-American to give a poor accounting of himself this week.

Witness CNN anchor Chris Cuomo do his best impersonation of a guido auditioning for “Jersey Shore,” (only missing the “Come at me bro” bit) when faced with a heckler who called him “Fredo,” a reference to the hapless second son from “The Godfather” book and movies.

To be fair, and to quote another genre classic, the guy did “insult him a little bit.”

But Cuomo went way overboard (as did CNN in trying to defend him) in trying to claim that calling him “Fredo” was an “ethnic slur” akin to the N-word.

There are lots of ethnic slurs for Italians, as Cuomo surely knows, most of them packed into a single line in the first “Godfather,” delivered by the movie producer who later finds a prized horse’s head in bed with him.

Fredo? Not so much.

Taken with the re-emergence of Anthony Scaramucci, who claims to have suddenly discovered a conscience and is now speaking out about his former boss, the president, and former White House press secretary Sean Spicer (who, in a cringey moment, the Mooch called “Liar Spice from the Spice Girls”) after his blink-and-you-missed-it turn as White House communications director in 2017, we’re not doing our ancestors proud.

No one’s chanting to send us back yet.

But I couldn’t necessarily blame them just now if they did.

For Virginia, adapting to sea level rise starts with choosing a curve 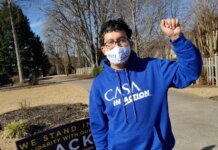 Delays, legal challenges allowed the curtain to be pulled back on...