Renovation has begun on the Alderman Library, the main library at the University of Virginia. Library materials have been moved to other stacks, preliminary construction will begin in January 2020, and the library will be fully closed in May 2020, re-opening in 2023. The university has invested $160 million dollars in this renovation but has neglected to commit to one easy, inexpensive change.

It is well past time to remove Edwin Alderman’s name from the library.

This summer, I went through Alderman’s papers as part of an internship with the Law Library on the history of eugenics at UVA. Edwin Anderson Alderman was the University of Virginia’s first president, serving from 1903 until his death in 1931.

Alderman library was built in 1938. While Alderman’s racism and belief in eugenics are generally known, reading his own words firmed my conviction that keeping his name on the library is unacceptable. But I’ll let Alderman speak for himself: here is a quote from an address given on December 29, 1903, titled, “The Value of Southern Idealism:”

“It is a solemn duty of the white man to see that the negro gets his chance in everything save social equality and political control. […] This does not mean that the lower should be prevented from rising, but that it should not be permitted to break down the higher. […] Social equality and political control would mean deterioration of the advanced group, and the South is serving the Nation when it says it shall not be so.”

How much clearer can you get? And let’s not pretend that Alderman’s racism was limited to African Americans. Alderman would likely have prevented 35% of the class of 2023, the most diverse class in the university’s history, from entering the university. Indeed, he clearly says he would have worked to deny them full citizenship in favor of maintaining a white supremacist social order.

Other university buildings have dropped the monikers of known white supremacists and eugenicists. Most recently, Pinn Hall was changed from Jordan Hall in 2017 to honor Dr. Vivian Pinn, the first black woman to enter the UVA School of Medicine. This change was celebrated in university publications. Alderman, however, has been a tough figure to “reconcile”: in a Cavalier Daily article last year, some were quoted saying Alderman was “too much of an institution” who “should be remembered for the positive things” he had done.

At the end of the day, though, it doesn’t matter how entrenched Alderman is in UVA, and it doesn’t matter how many positive things he has done. (He is credited with founding the Curry Memorial School of Education sanctioning the admission of women to U.Va.’s graduate and professional programs, reorganizing the university and growing its endowment, according to the Cavalier Daily.)

Alderman did not accept African Americans as his equal, and he took action to deny them social equality and political control. In many speeches he was extremely clear about this: if you don’t believe me, please look in his papers for yourself.

The fact that Alderman is considered an “institution” is precisely why the university should be eager to drop his name from the library. Alderman’s legacy reflects a deeply entrenched white supremacy in higher education, something that university officials should be rejecting and moving forward from every single time they encounter it.

Alderman’s vision for the University of Virginia is not one that we should be looking towards. Alderman considered whites the “advanced group,” and envisioned everyone else subservient to them. This is why it is utterly unacceptable to keep Alderman’s name on the library. Removing a name from a building is a symbolic step toward reconciliation, but it is a step that the university must take.

If the University of Virginia is not willing to take the small action of removing a name of a long-dead racist from the main library on grounds, how can students trust that it will act in their best interests when the stakes are higher? In failing to act, UVA would be announcing loud and clear, once again, that they do not fully support all of their students, and they will not be a part of a just, equitable future. 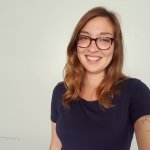 Aldona Dye is a doctoral candidate in critical and comparative studies of music at the University of Virginia. She is writing a dissertation on folk song collection in the early 20th century, focusing on how the practice reflected race, gender and class structures of the time.

Across cultural lines, home schooling has boomed since… by Jeff South January 3, 2022
Why is a Norfolk community development entity investing… by Jim Morrison December 21, 2021
Amid scrutiny, Norfolk housing authority subsidiary says it… by Jim Morrison May 3, 2022