At the time, it seemed like a real nadir.

Our first African-American president was being dogged by a nasty conspiracy theory with explicit racist and xenophobic overtones suggesting he wasn’t born where he said he was despite releasing his official long-form birth certificate.

Half of the nearly 2,500 readers who responded to my little Louisiana newspaper’s online poll didn’t believe him, along with about half of Republicans in a nationwide poll. Neither did the cheerful receptionist who greeted me as I walked into our office every day.

A column I wrote about the troubling failure of Americans to agree on a baseline fact about our president ended like this: “She went back to her reality, and I went back to mine. And I wondered how far apart they would continue to drift.”

Miles and miles, of course, is the answer eight years later.

Now, the types of conspiracy theories that were the province of the old chain emails that questioned Barack Obama’s citizenship are indignantly voiced by Republican members of Congress. Only in this alternate universe could an investigation that has yielded so many indictments, produced evidence of troubling, if not necessarily criminal, contacts between President Donald Trump’s campaign and Russia-linked agents as well as the well-substantiated effort to influence the election be summarily derided, dismissed and downplayed.

There is a poetic irony to the fact that the man who breathed so much life into the attempt to delegitimize his predecessor (a campaign that remained persuasive for many Republicans even after Trump himself disavowed it) now finds himself on the receiving end. But the divisions on display don’t bode well for the Republic.

Today, we in Virginia are to be graced with the presence of the birther-in-chief himself during an event intended to commemorate 400 years of representative government in the New World. Virginia’s Legislative Black Caucus and other Democrats are boycotting the appearance, a move that has elicited much tut-tutting of editorial boards and other columnists. To be sure, there’s probably a little more at work than outrage, with Democrats attempting to capture the General Assembly this fall and seemingly banking on anti-Trump sentiment to push voters to the polls in what are generally low-turnout elections.

I will not join the scolds, though I understand the impulse to lament the fact that we are at a juncture where merely tolerating an appearance by the president of the United States has become a fault line.

In fact, there’s a dark hilarity to a man so manifestly unfit for his job — elevated to the position in part by voters in thrall to demagoguery — trying to pull off a statesman turn by riffing on the ruff-collar deliberations of the first burgesses, the ancestors of today’s Virginia General Assembly, and attempting to unfurl the grand sweep of American democracy.

Trump only has himself to blame for the debasement of the presidency. Obama, after all, was subjected to massive disrespect from Republican lawmakers but never mused about keeping out people from “shithole” countries; never suggested minority congresswomen go back to where they came from; never called a prominent black congressman a “racist;” or a host of other indignities. (Remember when some conservatives groused about Obama demeaning the presidency by wearing a tan suit?)

If we are lucky today, Trump will take a break from picking fights with majority-black cities and merely deliver the type of error-strewn — but mostly inoffensive — nonsense he offered on the Fourth of July. But for someone who clearly sees division as a tactic heading into 2020, it’s anyone’s guess.

“My personal view is that the country’s about a lot more than the president,” Stephen Farnsworth, a University of Mary Washington political science professor told me. “Jamestown is about the core history of Virginia. And the disagreement among Democrats about whether or not to participate demonstrates the potential problems of the proposed boycott. … You don’t see widespread boycotts of the State of the Union. Who knows, that might be next?”

Indeed, it’s not hard to imagine a time in the future when the opposing party regards the president as illegitimate as a matter of course and lawmakers from the president’s own party put on blinders to all manner of serious problems, such as Russian meddling in our elections, which Mueller warned last week is happening “as we sit here.” 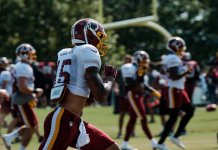 Delays, legal challenges allowed the curtain to be pulled back on the Atlantic Coast Pipeline