Next year, Virginia’s $100 million bridge to nowhere will finally connect to a road

The bridge over Grassy Creek along the Virginia-Kentucky border is the tallest in the state but hasn’t been connected to any open roadways since it was completed in 2015. (Photo by Ned Oliver/Virginia Mercury)

For the past four years, the tallest bridge in the state has stood along the Kentucky border unconnected to any open roadways on either side.

Some see it as a prime example of the politicization and mismanagement of transportation funding that led to the development of SmartScale, the state’s new point-based scoring system for road projects. Others see the slow pace of work as just another example of Richmond neglecting the needs of Appalachia.

In either case, an end to the bridge’s isolation is now in sight. With the the road on the Kentucky side nearly complete and work once again funded and under way in Virginia, it’s scheduled to officially open to the public next year, and, unofficially, people are already driving across it, though authorities on both side say they could be cited for trespassing.

“At least it connects to something now,” said Secretary of Finance Aubrey Layne, who previously served as secretary of transportation under former Gov. Terry McAuliffe’s administration.

Layne recalled his disbelief upon coming into office that a $100 million bridge had been funded that dead-ended into the side of a mountain with no money secured to take it any further. 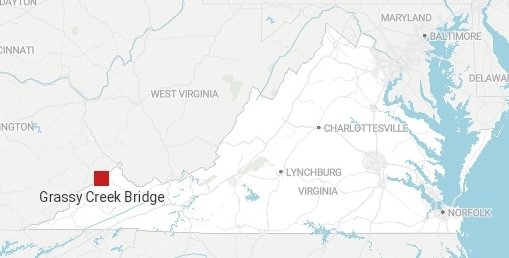 “I don’t understand how they started it that way, but it was what it was,” he said. “I assume they were anticipating getting additional federal monies when they stopped the program, but it does beg the question, why would they start there?”

The concrete, four-lane bridge spans Grassy Creek in Buchanan County. It stands 250-feet tall, making it the tallest in the state by about 75 feet. Construction began in 2011 and, in 2017 it was named a “bridge of excellence” by the American Segmental Bridge Institute.

The project is an offshoot of the long-discussed Coalfields Expressway, which would connect the state’s rural southwestern counties to West Virginia and Kentucky with the goal of stimulating economic development by opening Appalachia up to more industry and tourism.

But the federal funding that launched the project dried up not long after construction began on the bridge over Grassy Creek.

When the bridge opens next year, the primary roadway it was designed to serve on the Virginia side still won’t be open, but travelers from Kentucky will be able to make a hard right onto an existing road that goes to the Breaks Interstate Park, a state park jointly operated by Virginia and Kentucky.

Work has begun, however, to complete the primary roadway, which eventually will connect to Route 460, a major thoroughfare in the region. While the bridge is four lanes, the connector in Virginia, known as Corridor Q, has been downsized to two lanes, with climbing lanes where needed.

Deputy Secretary of Transportation Nick Donohue said the state has budgeted about $300 million for that work, which VDOT expects to complete in 2021. He said all of the funding is federal and did not come through SmartScale.

Next year, Virginia’s $100 million bridge to nowhere will finally connect to a road