With stock assessments showing declines for the Atlantic’s prized striped bass population, Virginia last week closed its spring recreational season for trophy-sized fish ahead of possible action by the regional council that oversees fisheries along the coast.

The emergency closure, which received unanimous support from the Virginia Marine Resources Commission, was hailed by Commissioner Steven Bowman as a necessary first step in restoring the declining population of striped bass (Morone saxatilis), a species also known as rockfish or striper that is fished both commercially and recreationally.

Starting May 16 through June 15 fishermen will be able to catch and keep two striped bass from 20 to 28 inches.

“There has to be a starting point for conservation,” Bowman said in a statement from the VMRC. “Today’s action was the first step, and the Marine Resources Commission will continue to look at other measures for both recreational and commercial sectors to further reduce fishing mortality.”

In a letter sent to the regional commission April 17, Virginia, Connecticut and Massachusetts asked that the ASMFC take steps to significantly reduce striped bass mortality and “reject half measures in favor of strong and enforceable actions that firmly place the striped bass stock on the road to recovery.”

The three states have recommended that those steps be formalized in an addendum to the existing Atlantic Striped Bass Fishery Management Plan — a short-term measure that VMRC Deputy Commissioner Ellen Bolen described as a “first cut” — followed by the development of an amendment, which would provide a more enduring roadmap to stabilize the population over the long term.

How to achieve that will be discussed at the spring meeting of the ASMFC, which will be held this week in Arlington. And while Bolen said that the body will likely “be debating any and all measures” to protect the population, she also said that in Virginia, “This is not just going to be something that affects the recreational fisheries.”

Virginia’s action came in response to a recent stock assessment of the Atlantic fishery showing that since 2010, striped bass have been dying at rates above the level that would allow the population to remain stable, and since 2013, the stock of spawning-age females has been below the sustainable threshold.

“Simply put, we are taking fish out faster than they can reproduce,” said Bolen.

Canceling the trophy season, during which fishermen are permitted to catch one striped bass that is at least 36 inches long, aims to protect the largest, most valuable fish in the breeding stock.

“With almost any fish species that you have out there, the larger and older that the fish are … the more impact they can have by spawning,” said Chris Moore, a senior scientist with the Chesapeake Bay Foundation. Reducing the catch of such fish, he said, “hopefully will help jumpstart the rebuilding.”

The VMRC’s closure of the trophy season isn’t the first time the state has constrained the fishery. Thanks to heavy overfishing, habitat loss and the building of dams that blocked stripers from reaching their spawning grounds, the population crashed in the late 1970s. In response, state and federal governments imposed moratoriums on fishing the species throughout the 1980s. The efforts were a success: the population rebounded, and in 1989–1990, both Virginia and Maryland reopened their fisheries with limits on both commercial and recreational landings.

In recent years, however, both scientists and fishermen have noticed the numbers of striped bass declining, causing concern among both groups. Data presented to VMRC’s Finfish Management Advisory Committee on March 25 showed that while over 700,000 stripers had been harvested recreationally in 2009, only about 52,000 were taken by recreational fishermen in 2018.

Voicing concern for the state of the overall fishery, the Virginia Saltwater Sportfishing Association has thrown its support behind the state’s efforts to rebuild the population. In an April 21 letter to the Virginia Marine Resources Commission, VSSA Board of Directors member Steve Atkinson reported that a survey had found that 70 percent of the group’s members were in favor of cancellation of the trophy season.

“No one wants to see another moratorium on these fish,” Atkinson wrote.

But while the VSSA expressed support for the current measures, it also urged policymakers to turn their attention to Virginia’s commercial fishery, as well as the fisheries overseen by other states.

“We believe that Virginia alone will not make any significant difference in rebuilding the stocks, and urge other states to follow, especially Maryland where they are harvesting far more fish than any other state,” Atkinson’s letter stated.

Between 2016 and 2018, Maryland took in about 42 percent of all striped bass harvested along the Atlantic coast. New Jersey and New York had the next biggest harvests, accounting for about 19 and 15 percent, respectively. Virginia accounted for about 3 percent of the overall harvest.

While officials seek to reverse the population’s decline, scientists are working to determine why it is occurring.

Many factors affect the health of the striped bass population, including air and water temperatures, water quality, weather, predation and available food stocks — particularly menhaden, a favorite meal of stripers and a subject of intense political wrangling in Virginia over the past year. After the ASMFC established a new quota for the harvest of the small, oily fish from the Chesapeake Bay, the General Assembly refused to approve it and only narrowly avoided being found “out of compliance” with the commission’s regulations, an outcome that would have allowed the commission to shut down the state’s menhaden fishery.

The Chesapeake Bay Foundation contends that “while the menhaden population is recovering, it is still a long way from being healthy and certainly a long way from fulfilling all the forage needs of striped bass and other predators.”

Others, however, argue that the population is robust. Bolen said that current assessments show that “there are plenty of menhaden.” However, she noted that the relationship between that fish and striped bass isn’t fully understood.

Also unclear is whether or not changing water temperatures due to climate change are altering the geographical distribution of striped bass, driving them farther north.

Whatever the decline’s causes, to Moore, Virginia’s closure of the trophy season is a prudent move to avoid a reprise of the striped bass moratorium of the 1980s.

“A lot of times we’ve waited too long to take any sort of management action,” he said. “This is a good example of Virginia taking action before they’re required to do it.” 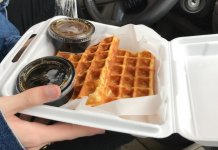