Gigi Grogan was named after Saint Gianna Beretta Molla, a Catholic pediatrician who refused an abortion despite the threat pregnancy posed to her life. Molla died in 1962, a week after her child was born.

Grogan, a student at Virginia Tech and leader of the college’s Students for Life chapter, said her parents named her for the pediatrician, reflecting deep pro-life beliefs they passed on. It’s why Grogan was among the estimated 6,500 people who attended Virginia’s first March for Life event formally affiliated with the national organization. The Family Foundation, the Virginia Catholic Conference and the Virginia Society for Human Life also helped organize the event.

“It’s a matter of life and death and valuing life from the moment of its beginning … it is very fundamental to how we treat life across the board,” Grogan said.

She said abortion rights has always been at the center of how she votes and will continue to be, “especially going forward.”

Grogan will likely not be alone when voters head to the polls this November for state House and Senate races, in part because of a flare-up that roused anti-abortion advocates during this year’s General Assembly session, several political scientists said.

“There’s a lot of energy behind this issue and I think it’s going to play a role in the election this fall,” said Quentin Kidd, director of the Judy Ford Wason Center for Public Policy at Christopher Newport University. “I think Republican candidates and conservatives will make this an issue.”

Before March For Life began its event, a group of a few dozen pro-choice supporters met in Capitol Square. Organizers pointed to polling that suggests a majority of Virginians — 72 percent — believe abortion should be legal. The group had dispersed by the time most pro-life supporters arrived.

March For Life had been considering a Virginia event, but widely publicized questioning of Del. Kathy Tran, D-Fairfax, about a late-term abortion bill in a legislative committee and Gov. Ralph Northam’s comments following the controversy solidified the decision, said March For Life President Jeanne Mancini.

“Tran was the final impetus,” she said of the decision to hold a Virginia event. “As sad as the moment is with these extreme abortion bills being pushed, it’s also a pivotal point.”

In a January video, Tran agreed that her bill, which failed on a 5-3 vote, would allow a woman to receive an abortion up to the point when she is about to give birth. Virginia House Republicans tweeted that the legislation would “provide abortions up to just seconds before that precious child takes their first breath.”

Under existing law, women can get abortions after the second trimester only if three physicians conclude “the continuation of the pregnancy is likely to result in the death of the woman or substantially and irremediably impair the mental of physical health of the woman.”

Tran’s legislation would have reduced the number of physicians required to approve the procedure to one and eliminated the words “substantially and irremediably.”

That was “shocking,” Mancini said.

Republican lawmakers made a brief appearance at the rally. Speaker of the House Kirk Cox, R-Colonial Heights, promised to fight against abortions, in part by rejecting Northam’s proposed amendments to the budget that would allow state money for organizations that perform abortions.

Mancini, a Virginia resident, said there is more interest and enthusiasm in the pro-life movement, something she attributes to “egregious” late-term abortion bills like Tran’s and one approved in New York.

“What I see is the abortion lobby working very hard for these extreme abortion bills to be passed,” Mancini said. “However what we’re seeing is mainstream America, even pro-choice Americans, know that aborting a 7-pound baby that just hasn’t yet been born is not the right thing to do.”

Finding an issue that sticks

The thousands of people gathered at the Capitol on Wednesday suggest abortion rights isn’t just a policy rallying point, but also gives some Republican politicians impactful campaign material, said Stephen Farnsworth, director for the Center of Leadership and Media Studies at the University of Mary Washington.

“The first most visible use of abortion will be in Republican primaries,” he said. “There are Republicans facing challenges from other Republicans who claim they’re not conservative enough.”

Republican candidates from both chambers of the legislature have made it a point to highlight their pro-life platform and voting records in early campaigning.

The nature of elections has changed, Kidd said. In the past, candidates have had to try to attract moderate voters, but now the focus has shifted to getting traditional voter bases to the polls.

Republicans have a number of legislative successes to highlight on the campaign trail — tax policy, college tuition costs and reversing a law that suspends driver’s licenses of people who owe court fines — but abortion is one of the most reliable issues to get people to vote, Kidd said.

For a time, the Republican Party focused on gay and LGBTQ issues to mobilize their voters, but that began alienating younger people who may have otherwise voted for GOP candidates, said Jesse Richman, a political science professor at Old Dominion University.

“Abortion is, in some ways, the exception to other culture war issues in that you don’t see as much of a generational divide,” Richman said. “Emphasizing abortion doesn’t weaken the Republican Party’s ability to attract people from the younger generation.”

A February 2019 Washington Post poll of 706 Virginians found 58 percent considered abortion to be a very important issue, and 10 percent said it was the single-most important issue to them.

Thirty-six percent of people aged 18 to 39 polled said they thought abortion laws should stay the same. Thirty-two percent said the laws should be less strict.

Grogan, who is 21 years old, said abortion rights will be a major consideration when she votes in the future. She said it influenced her decision in the 2016 election.

“I believe very much in the value of life in a non-discriminatory fashion,” she said. “Who I go to vote for, I hope, is representative of that ideology.” 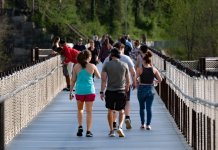 Here’s what will — and won’t — change under Gov. Ralph Northam’s new stay-at-home order

In a maelstrom of mistakes, failing to learn from this pandemic would be the gravest error