If a cigarette is unlit, it won’t do you any harm, said Keith Andes, president of the Richmond Association of Firefighters.

“But the moment you light that cigarette — or the moment you enter that burning building — all kinds of chemicals are now affecting you,” Andes said.

Andes was a firefighter for the Richmond Fire Department for more than 35 years, retiring at the rank of captain in 2013. Since then, he has been lobbying for a bill to help firefighters diagnosed with cancer, an occupational hazard they contend stems from the increasing amounts of toxins they are exposed to on the job.

Legislation by Sens. Amanda F. Chase,  R-Chesterfield, and John Cosgrove, R-Chesapeake, would add brain, testicular and colon cancers to the list of presumed occupational diseases covered by the Virginia Workers’ Compensation Act. The bill also advocates for those affected to jump through fewer hoops to prove the job caused their cancer.

“We’re coming in contact with things that are killing us and are being asked to figure out what it is,” Andes said. “In a 20- or 30-year career, that’s something you just don’t know.”

According to the Firefighter Cancer Support Network, firefighters have a 14 percent higher risk of dying from cancer than the general U.S. population. In 2016, cancer caused 70 percent of the line-of-duty deaths for career firefighters.

“We’re in this fight is because our brothers and sisters are dying. We need to add these cancers to the list,” Andes said.

Thirty-three states cover firefighters for one or more cancers under workers’ compensation as a result of presumption legislation, according to the First Responder Center for Excellence. In 20 of those states, any cancer experienced by a firefighter is covered. But only specific cancers are covered in the other 13 states, including leukemia, brain cancer and non-Hodgkin’s lymphoma.

Former Richmond Fire Marshal David Creasy, was diagnosed with terminal cancer in 2014 after some two dozen tumors were found on his liver. He continued working as Richmond’s fire marshal for three more years before retiring in 2017, helping lead the push to expand worker’s compensation coverage for certain cancers and educating other firefighters about how to mitigate exposure to carcinogens.

His wife, Martha Creasy, said because her husband’s cancer was not covered by workers’ compensation, they were paying up to $7,000 out of pocket in medical bills every month.

“We had to sit down and have the talk of when enough was enough and when to pull the plug,” Martha said. “Those are some of the hardest talks you will ever have in your life. It’s like you’re terminating someone’s life.”

Creasy died in October. He was 67 years old.

Martha promised Creasy on his deathbed she would “not give up the fight.” She has since continued teaching classes on firefighter safety at fire departments across the state.

On Jan. 15, Martha led hundreds of firefighters from across Virginia in a march to the Capitol urging legislators to approve the bill.

“I walked that hill for him. I wanted people to realize cancer doesn’t just hit this one or that one – it hits everybody,” Martha said.

Weissman’s request was denied. According to Virginia state law, to qualify for workers’ compensation Weissman needed to identify the specific toxin he was exposed to within the past five years.

Weissman said it’s an “impossible feat” to identify the specific cancer-causing chemical in “toxic soup,” a term used by firefighters to describe the air in burning buildings.

“Over a 40-year career, how do I know what toxin it was?” Weissman said. “You can’t see these things. It’s not like they’re out in front of you.”

Among the possible culprits, Weissman says, are benzenol, pyrene and other polycyclic aromatic hydrocarbons (PAH). In many incidents, large amounts of PAH are released into the air from burning wood, plastics, furniture, electronics and other building materials, creating a soup of carcinogens.

“If the law was changed it would simplify this whole process and a lot more firefighters would be covered,” Weissman said.

Concern about firefighters’ cancer risk grew after the Sept. 11, 2001, World Trade Center attacks because of their exposure to dust containing asbestos, lead, jet fuel and contaminants from building materials. Last year, a team at Memorial Sloan Kettering Cancer Center in New York City reported that 9/11 firefighters had an elevated risk of multiple myeloma, among other cancers.

And it’s possible that some firefighters and first responders who were exposed to toxins after the 2001 attacks have yet to be diagnosed. Asbestos-related cancers, notably lung cancer, can take up to 20 years for symptoms to show.

“We’re being hit at all age levels,” Andes said, explaining many firefighters aren’t diagnosed until years after retirement.

Len “Archie” Archer is one of them. Archer served the Richmond Fire Department for 32 years before retiring in January 2017. He was diagnosed with Stage IV pancreatic cancer six months later. Doctors told him he had two to eight months to live.

Archie said he was “lucky” to have a few well documented cases putting him in close proximity to carcinogens that impact the pancreas. As a result, his request for workers compensation was approved.

The coverage Archer received led him to the Cancer Treatment Center of America in Philadelphia. There he met Arturo Loaiza-Bonilla, chief of medical oncology, who enrolled Archer into a trial study with pharmaceutical company Merck & Co. After signing a waiver, Archer began immunotherapy treatments almost immediately.

The drug has never been used on pancreatic cancer before.

“The drug puts my personal immune system on hyperdrive and kills everything,” Archer said. “Everything good and everything bad in my body that it doesn’t recognize.”

Archer travels to CTCA for immunotherapy every three weeks since beginning treatments in August. The goal is to “build a wall” around Archer’s cancer cells to keep them from invading other parts of his body.

Archer said the next step in decreasing cancer rates among firefighters is to be more proactive on cleaning uniforms.

“For a majority of my career, we only had one set of turnout gear,” Archer said. “So you consider 30 years of inhaling carcinogens, you’re going to have some ill effects. … But at the time that was the best we had.”

In a 2017 study by the University of Ottawa, researchers followed 27 male firefighters before and after they responded to emergencies in 2015 and 2016. The results showed a significant link between PAH metabolites in urine and on skin, suggesting firefighters were exposed to harmful chemicals mainly through contact with their skin rather than breathing them in.

The researchers concluded skin decontamination immediately after fighting a fire could reduce firefighters’ exposure to these potentially cancer-causing toxins.

For the past year, Stafford County firefighters have instituted a “decontamination policy” to clean their gear immediately upon returning from a fire.

“Stats have shown that a simple wash with soap and water removes 80 percent of the toxins after a fire,” Weissman said. “Back at the firehouse we shower and clean our uniforms, immediately getting them in the wash. If they’re really dirty they get professionally cleaned.”

Weissman has been in remission for almost three years. Since being denied workers compensation, he has dedicated his career to reducing cancer rates among firefighters. He speaks openly with firefighters in recruitment school about his cancer and the dangers of toxins they will face on the job.

Weissman is also the assistant director of the Firefighter Cancer Support Network, an organization dedicated to provide occupational-cancer awareness and prevention training for firefighters nationwide.

“We just got to tell the politicians that are sitting up on Capitol hill right now to do the right thing,” Weissman said. “We put our lives on the line every single day. … Just do the right thing and protect us. We’re not asking for anything out of the ordinary.”

Despite the hardships he has faced since his diagnosis, Archer said if given the option, he would live out his firefighting career all over again.

“I would live the same life I had with my brothers for 32 years. I would never, ever deny another opportunity like that,” Archer said. “That job was the best part of my life.”

Legislation adding cancers of the brain, colon and testes to those that are presumed to be an occupational disease covered by the Virginia Workers’ Compensation Act when firefighters develop them passed the Senate last week and now heads to the House of Delegates. 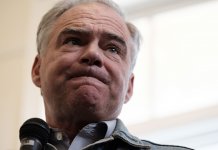 Tracking bills during the General Assembly session: like drinking from a...