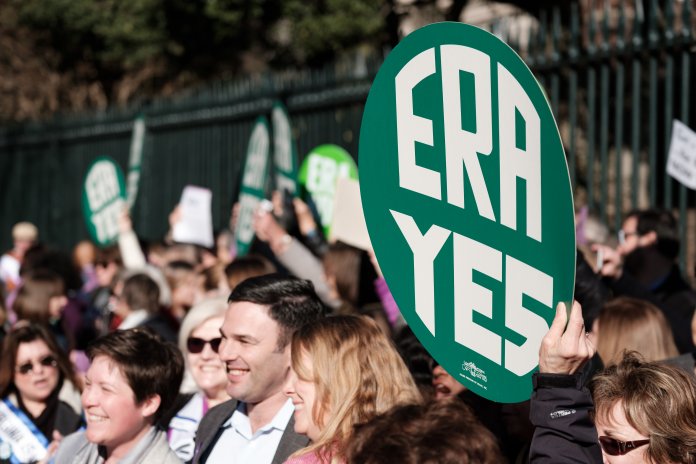 A push to make Virginia the final state needed to ratify the ERA cleared its first hurdle Wednesday, passing out of committee in the Senate with enough bi-partisan support to nearly guarantee passage when it hits the floor.

The more conservative House of Delegates, where it didn’t even get a hearing last year, is likely to be a heavier lift.

Objections Republican opponents raised Wednesday fell into two broad categories: First, that it’s no longer a valid amendment and there’s no point in passing it. And second, that it would enshrine all kinds of things conservatives generally oppose, like abortion, in the Constitution.

Sen. Glen Sturtevant, R-Richmond, dispatched the first concern by noting for the sake of argument that, even if it is invalid, “the General Assembly is no stranger to symbolic votes and there’s no reason we should not do it in this case.”

As for the second set of concerns, he argued that a constitutional guarantee of equal rights regardless of sex is too important to get mired in worries about unintended consequences. (Sen. Amanda Chase, R-Chesterfield, who voted against it, wanted to know just how “sex” would be defined under the amendment amid changing social norms.)

“The way I have tried to think about this is, we don’t refuse to do what is right because we are worried about how others may try to interpret it or misinterpret it,” Sturtevant said.

Asked specifically about abortion, Sturtevant’s co-patron in the Senate, Sen. Dick Saslaw, D-Fairfax, brushed off the question, calling it “nonsense.”

“I have no idea, but if it eases their access, then fabulous,” he said.

Opponents like the Virginia Family Foundation point to three other states that incorporated ERAs into their constitutions and subsequent court decisions cited the amendment in striking down restrictions on public funding for medically necessary abortions.

“Since only women become pregnant, discrimination against pregnancy by not funding abortion when it is medically necessary and when all other medical expenses are paid by the state for both men and women is sex-oriented discrimination,” wrote judges of the Connecticut Superior Court in a 1986 decision.

That, however, is as far it’s gone in practice.

Leaders of the Virginia campaign insist that abortion concerns raised by opponents are a red herring, noting that women already have a right to an abortion under Roe V. Wade, which has nothing to do with the ERA, because, obviously, it hasn’t passed.

And in Virginia, Medicaid already covers medically-necessary abortions, as well as when the pregnancy stems from rape or incest.

They also note that the aforementioned court decisions “specifically state that they do not address the legality or morality of abortion rights.”

There are questions about how the amendment could come into play in a post-Roe world.

The Daily Beast reports that organizers behind the ERA have long debated how and whether to include abortion in their campaign:

They can assert that the ERA has nothing to do with abortion in order to win over skeptical conservative legislators now — but thereby setting themselves up for contradiction if and when the ERA is later needed to preserve abortion rights. As Cardozo Law professor Julie Suk put it, “If you get your victory by not bringing in the divisive issues, it’s not as big a victory.”

Alternatively, advocates can assert those abortion rights now, galvanizing the support of young women who fear a post-Roe future but potentially firing up the conservative critics that could block ratification.

“I think whether or not judges have an obligation to read abortion rights into an ERA that may pass really depends on how loud we are as those who advocate and help get the ERA ratified today,” said Suk.

That said, the article notes that “a conservative Supreme Court that’s willing to strike down Roe v. Wade isn’t necessarily going to interpret the ERA as mandating abortion specifically.”