The U.S. Court of Appeals for the 4th Circuit, based in Richmond, vacated another permit for Dominion Energy’s Atlantic Coast Pipeline Thursday, this time concluding that the U.S. Forest Service lacked the authority to allow the pipeline across the Appalachian National Scenic Trail, among other findings.

An environmental attorney who worked on the case says the decision denies Dominion a critical crossing that the pipeline needs to proceed as planned.

“This is a really consequential decision for this project,” said Greg Buppert, an attorney with the Southern Environmental Law Center in Charlottesville. “If I were Dominion I would be panicked.”

A Dominion spokesman did not respond to a request for comment on the decision.  The company was reportedly looking for an assist from Congress to get around the legal pitfall.

“What we’re seeing is that Dominion’s scheme to use political pressure, money and influence to bend the rules is backfiring. And it’s backfired for every permit the 4th Circuit has considered this year,” Buppert said. “It’s too late for Dominion to be going to Congress to get a fix for this problem.”

The Richmond-based panel of judges also concluded that the agency’s decision to allow the 600-mile natural gas pipeline across the trail violated both the National Forest Management Act and the National Environmental Policy Act.

Dominion voluntarily suspended construction last week after another permit — an incidental take statement issued by the U.S. Fish and Wildlife Service — was stayed by the same court, one of several approvals that have been suspended or stripped from the project.

“We trust the United States Forest Service to ‘speak for the trees, for the trees have no tongues,’” the court said, quoting from Dr. Seuss’ book “The Lorax.”

“A thorough review of the record leads to the necessary conclusion that the Forest Service abdicated its responsibility to preserve national forest resources. This conclusion is particularly informed by the Forest Service’s serious environmental concerns that were suddenly, and mysteriously, assuaged in time to meet a private pipeline company’s deadlines.”

Dominion has banked the entire project, which is ballooning in cost, on being able to cross the trail in the George Washington National Forest in western Virginia. The court’s order says the pipeline was “routed on national forest lands in order to avoid the need for congressional approval for the pipeline to cross the Appalachian National Scenic Trail.”

The most momentous piece of the decision is that “the route Dominion wants to build is no longer on the table,” Buppert said.

“At the very least this sends Dominion back to the drawing board,” Buppert said. “And at some point, the costs of this project get too outrageous.”

While the federal Mineral Leasing Act authorizes the secretary of the interior or the “appropriate agency head” to authorize gas pipeline rights of way across federal lands, there is an explicit exception for lands in the National Park System.

Long into the permitting process, the Forest Service raised serious concerns about whether the pipeline could be built through the national forests without causing landslide risk, damaging forest integrity and without serious harm to wildlife. Then, when the Federal Energy Regulatory Commission came out with its final environmental impact statement for the project, those issues melted away without being addressed.

“The lengths to which the Forest Service apparently went to avoid applying the substantive protections of the 2012 Planning Rule — its own regulation intended to protect national forests — in order to accommodate the ACP project through national forest land on Atlantic’s timeline are striking, and inexplicable,” the court order says.

The service also failed to demonstrate the needs of the pipeline could “not be reasonably met on non-national forest land” and failed to “take a hard look at the environmental consequences” of the pipeline, the court found.

“Perhaps nothing demonstrates the dangers of the Forest Service’s insufficient analysis of landslide risks clearer than the FEIS’s use of the Columbia Gas Transmission pipeline as an example of an existing pipeline in the Appalachian Mountains that safely crosses karst terrain,” the order says.

“Significantly, during the briefing of this case, a landslide in Marshall County, West Virginia, caused the Columbia pipeline — highlighted by the Forest Service for its safety and stability — to rupture and explode.”

David Sligh, conservation director for Wild Virginia, a former Virginia Department of Environmental Quality engineer and environmental attorney, said the decision chronicles “a regulatory process that was hijacked by political appointees willing to sacrifice the public good for corporate greed.”

UPDATE: In a statement to the Richmond Times-Dispatch, Dominion blasted the court’s decision and vowed to appeal to the full 4th Circuit.

“With this decision, the 4th Circuit has now undermined the judgment of the dedicated, career professionals at nearly every federal agency that has reviewed this project,” said Aaron Ruby, spokesman for Dominion, the lead partner in the project with Duke Energy, Southern Company Gas and Piedmont Natural Gas.

“If allowed to stand, this decision will severely harm consumers and do great damage to our economy and energy security,” said Ruby, who claimed that 56 other oil and gas pipelines cross the Appalachian Trail. “Public utilities are depending on this infrastructure to meet the basic energy needs of millions of people and businesses in our region.”

How critical the project is though, is under considerable suspicion. Only two power plants in Virginia will be connected to the pipeline, and they are already served by the Transco pipeline. In fact, almost of all of the capacity is subscribed for by subsidiaries of the energy giants developing the project, which stand to gain a 15 percent return on their investment. 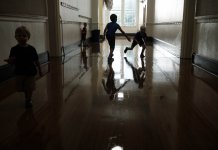 With classes done until at least September, kids in abusive households lose a safety net

In a maelstrom of mistakes, failing to learn from this pandemic would be the gravest error