“We need Jennifer Wexton in Congress,” he says, before Wexton, a state senator, jumps in, thanking him for his support.

She goes on to highlight her platforms, including creating better jobs and schools and tells listeners she believes health insurance is a right.

Wexton, who speaks Spanish, is focusing on the Latino population in the 10th District, where she’s running against Republican U.S. Rep. Barbara Comstock.

It’s an ultra-competitive race and Latinos make up about 8 percent of the district’s voting population, according to the Pew Research Center.

And for that reason, the Virginia Latino Leaders Council also thinks its one place where the Latino vote could change the outcome.

The council, based in the 10th District, endorsed Wexton and Kaine last week based on a survey of Latino community members.

“I know Ms. Wexton to be a fair person who makes careful decisions about what is right for the commonwealth,” one respondent to the survey wrote. “She will oppose the Trump platform of fear and division.”

“Our campaign also has Spanish-language literature mostly distributed from our Manassas office, which is nearest to the largest Spanish-speaking populations in the district, and we hold regular phone-banks with staff and volunteers who call Spanish speakers to talk to voters about the campaign and the issues that they care about,” Aaron Fritschner, Wexton’s campaign spokesman, said in an email.

The district Wexton is running in doesn’t have the most Latinos in the state — that would be the neighboring 8th District where Democratic U.S. Rep Don Beyer is defending his seat against Republican newcomer Thomas Oh.

The 8th District has 155,000 Latinos and 59,000 of them are eligible voters. Beyer is distributing Spanish-language fliers in the district, his campaign said.

And in Southwest Virginia’s 9th District, Democratic candidate Anthony Flaccavento held a town hall specifically for Latino voters and has also translated his campaign material into Spanish for his campaign against Republican incumbent Morgan Griffith.

Wexton isn’t the only candidate trying to reach Latino voters, who have been one of the fastest-growing voting blocs in the country for several years, according to Pew.

This year, there are 29 million Latinos who are eligible to vote in the U.S. midterms, up from 25 million in the 2014 midterms.

In Virginia, Latinos make up about 5 percent of the voting-age population, according to the U.S. Census. That’s a little more than 300,000 people.

U.S.-born Latinos are coming of age, which has contributed to the large growth in the population. But more Latinos are also opting to go through the naturalization process to become citizens and even more are leaving Puerto Rico for the U.S. mainland.

Although Puerto Ricans are considered U.S. citizens, they aren’t able to vote in American general elections if they live on the island.

Cline said he hasn’t translated his website to Spanish; Comstock, Taylor and Brat’s campaigns did not respond to requests for comment on the topic.

In the western Virginia district, which runs from Roanoke to Front Royal, Jennifer Lewis’ face is pasted on a billboard alongside Spanish phrases: “Proteger TPS/DACA/DAPA; Un salario mínimo de $15/hora; Medicare para todos” the advertisement reads. (Protect TPS/DACA/DAPA; A minimum wage of $15/hour; Medicare for all)

The billboards and brochures written in Spanish distributed in the 6th District might seem oddly placed. It’s not an area with a large population of Latinos, but there are more than there used to be, said Lewis.

“They’re a growing population and they give so much back to our community, we want to make sure they’re heard,” she said. There are about 17,000 Latino voters out of 578,000 total eligible voters in the 6th District, according to Pew.

In addition to campaign materials, Lewis, who doesn’t speak Spanish, had volunteers help her translate her campaign website to the language.

Kaine, who is known to speak Spanish on the campaign trail, kicked off the trend among Democrats with a set of Spanish TV ads released earlier this month.

Set to clips of Latino business people, shopkeepers and other workers, Kaine said in Spanish, “Hard work and determination are key to the backbone of the economy. I see it every day in Virginia’s Latino community. Because of that, I’ve worked to make comprehensive immigration reform a reality so that our economy and workforce grow.”

“The ads exemplify the stark contrast between Kaine’s embrace of Virginia’s diversity and Corey Stewart’s record of divisive rhetoric and dangerous policies toward immigrant communities that have eroded trust and harmed business and public safety in Prince William County,” Kaine’s campaign said in a news release accompanying the ads.

Stewart made a name for himself by implementing tough local immigration policies as chairman of the Prince William Board of County Supervisors. As a senate candidate, his website vows that he will “fight illegal immigration, amnesty, and ban sanctuary cities as boldly as he did in Prince William County.”

“Every illegal immigrant arrested should be deported – no questions asked,” the site says. “Stewart will work side-by-side with the Trump administration to make that happen. As U.S. senator, Corey Stewart will oppose any form of amnesty, and he won’t back down to establishment pressure.”

According to the survey the Latino Council completed, comprehensive immigration reform was the top policy priority for respondents. It was followed by health care, education and jobs.

That’s what Lewis has heard on the campaign trail as well. She supports the DREAM Act and wants to protect the Deferred Action for Childhood Arrivals (DACA) policy while working on a better pathway to citizenship.

“The biggest challenge is the ignorant and racist comments and policies from the current administration and members of the GOP,” Lewis said.

Latino voters are traditionally Democratic voters, which could explain why some Democrats aren’t pushing Spanish campaign material and why Republicans aren’t putting in the same work on that demographic.

But Latino voters are still no guarantee for Democratic candidates, said Mark Rozell, the founding dean of the Schar School of Public Policy at George Mason University.

“The big unknown is the turnout rate,” Rozell said in an email. “The 2016 election cycle was supposed to be the year of the ‘Latino surge’ against Trump, but that really did not happen.”

In 2016, about 54 percent of Latinos nationwide felt like the Democratic Party was concerned about the demographic, according to a Pew study. This year, it’s fallen to 48 percent. 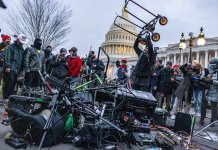 Should coastal residents who stay put in face of flooding get...