It can’t be said enough, and it’s something that’s easy to lose sight of amid the labyrinthine legal and permitting debates around the Atlantic Coast Pipeline, which could be getting federal approval to start full construction in Virginia any minute now.

The need for Dominion Energy’s 600-mile Atlantic Coast Pipeline is far from proven — certainly not in Virginia — despite the  propaganda piece extolling the virtues of the project that company CEO, president and CEO Thomas Farrell got published Sunday in the Richmond Times-Dispatch.

Your case should be ironclad before a federal agency gives your company the authority to blast, trench and tunnel your way across 600 miles in three states, trampling on private property rights, national forests and parks, sensitive habitats and waterways and through aquifers remote communities rely on for drinking water.

In fact, the preponderance of evidence points to Dominion being well on its way to foisting a massive con on its 2.5 million ratepayers here, as opponents of the pipeline have warned all along.

Another newspaper editorial page, The Virginian-Pilot, also recently parroted the company line on the project, that the hundreds of landowners and communities along its 600-mile path are the unfortunate eggs that must be broken to cook a reliable, affordable energy omelet for the rest of us.

The only way you can still believe that is if you steadfastly refuse to look behind the curtain.

Dominion will point you to the voluminous work done as part of the Federal Energy Regulatory Commission’s certification process for natural gas projects, but what they won’t tell you is the agency’s review of actual public need is stunningly cursory.

Who are those shippers? They’re almost all subsidiaries of the energy companies developing the project, which comes with a 14 percent rate of return they’ll try to recoup from their ratepayers.

FERC brushed that aside though.

“The fact that five of the six shippers on the ACP project are affiliated with the project’s sponsors does not require the commission to look behind the precedent agreements to evaluate project need,” the certificate says.

Because it has basically become a rubber stamp for an industry that is on a wild overbuilding spree, FERC is currently in the midst of a lengthy process to review how it evaluates pipeline projects.

It’s become so out of whack, in fact, that politicians from different sides of the ideological divide, from Democratic Virginia Sen. Tim Kaine to U.S. Rep. Morgan Griffith, R-9th, have introduced legislation to reform the FERC’s pipeline approval procedures.

The agency has also shown itself toothless in trying to combine or modify duplicative or dubiously justified projects like the Atlantic Coast and Mountain Valley pipelines, evidenced by FERC Commissioner Cheryl LaFleur’s rare dissent on the projects.

“My balancing determination was heavily influenced by similarities in their respective routes, impact and timing. ACP and MVP are proposed to be built in the same region with certain segments located in close geographic proximity. … Both projects appear to be receiving gas from the same location, and both deliver gas that can reach some common destination markets,” LaFleur wrote. “I am particularly troubled by the approval of these projects because I believe that the records demonstrate that there may be alternative approaches that could provide significant environmental advantages over their construction as proposed.”

The commission staff looked at a merger of the two projects, but ultimately dismissed the idea.

“Commission staff eliminated this alternative from further consideration because it failed to meet the project’s objectives, in particular that it would ‘result in a significant delay to the delivery of the 3.44 Bcf/d of natural gas to the proposed customers of both ACP and MVP’ due to the significant time for the planning and design that would be necessary to develop a revised project proposal,” according to LaFleur’s dissent.

Translation: We didn’t make them do it because the pipeline companies didn’t want to. However, ACP did appear to get some credit from LaFleur for at least taking the trouble to sign up subsidiaries, which is more than MVP did.

She noted that while “Mountain Valley has entered into precedent agreements with two end users … for approximately 13 percent of the MVP project capacity, the ultimate destination for the remaining gas will be determined by price differentials in the Northeast, Mid-Atlantic, and Southeast markets, and thus, is unknown.”

Aside from FERC’s laissez faire approach to evaluating need, there’s a wealth of other evidence undermining the case for the Atlantic Coast Pipeline:

♦ Dominion executive Dan Weekley boasted that  “everybody knows” the pipeline won’t stop in North Carolina and that it could carry a billion cubic feet a day of gas into South Carolina. Given that the pipeline’s present capacity is 1.5 billion cubic feet a day and that Dominion has pointed to the fact that the gas was 96 percent spoken for and urgently needed in Virginia and North Carolina, those remarks sent pipeline opponents into a justifiable fury.

♦ Speaking of South Carolina, where Dominion is having a tough time trying to bully, cajole and bluff its way through a merger with SCANA, a struggling South Carolina utility holding company, a regulatory filing also knocked a hole in the case for the project. Transco, which operates the major pipeline system that delivers natural gas from the Gulf Coast to the Southeast and Eastern Seaboard, filed a petition for rehearing after it was denied a chance to intervene in the merger case before the state’s Public Service Commission. “Transco has the infrastructure and pipeline in place to serve the Southeast, including South Carolina, for many years,” the company wrote.

♦ Despite Dominion’s and Farrell’s claims that the pipeline is needed to guard against price spikes during severe weather, a Dominion official testified to Virginia’s State Corporation Commission that the company has not studied whether the ACP is the most cost effective way to deal with the spikes. And, in another filing, an energy expert testified that a Transco expansion will alleviate the biggest driver of price spikes in our region, constraints of gas supplies for New York City.

♦ Southern Company became a partner in the project not to boost capacity for its subsidiary, Virginia Natural Gas, which has subscribed for just 10 percent of the Atlantic Coast Pipeline gas, but “because it’s a good investment,” a company official told the Richmond Times-Dispatch back in 2016.

♦ Also, remember that the project will connect to just two Virginia gas power plants — in Brunswick and Greensville — which are both already served by the Transco pipeline. Dominion has argued the new source provides “supply diversity,” but has also admitted it has never done a study to determine if it needs the ACP gas to keep the lights on in Virginia.

And despite Dominion’s plans for smaller new gas plants — it says it does not intend to build new, large combined-cycle plants like Brunswick and Greensville — its projections of load growth to justify them have proven to be inflated. The data centers that are the big drivers of new electric demand for the company say they want nothing to do with fossil fuels.

Estimates that Dominion failed to keep out of SCC proceedings indicate that the ACP could eventually cost Virginia ratepayers more than $2 billion extra on their bills.

For the pièce de résistance, by virtue of how the capacity agreements work for natural gas, Dominion will attempt to bill all of us for the cost of the Atlantic Coast Pipeline even if their power plants never use any of the gas. The State Corporation Commission has a say in that, but by the time a case gets to them, the pipe will be in the ground already.

“What you’re left with, in Virginia at least, is a regulated utility using its captive customers to bear all the risk of a multi-billion dollar boondoggle that the utility has never studied whether it needs it and the utility is going to make customers pay for it regardless of whether they ever use it,” said Will Cleveland, an attorney with the Southern Environmental Law Center, earlier this year.

Theresa “Red” Terry, known for her five-week tree-sit on her own land to protest the separate Mountain Valley Pipeline, isn’t a lawyer.

But she put an even finer point on the perversion of public need for private gain at a meeting of the State Water Control Board last month.

“Dominion is buying their own gas so they can have permission to rape our property,” she said. “I would love to look at anyone else and say ‘I would love to make money. I’m taking it from you.'”

CORRECTION: This post has been edited to correct Virginia Natural Gas’ share of the Atlantic Coast Pipeline capacity. 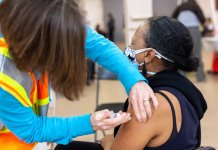 The con at the heart of the Atlantic Coast Pipeline