President Donald Trump approved Virginia’s request for a major disaster declaration, which will allow money from the Federal Emergency Management Agency to cover most of what it spent in preparation for Hurricane Florence last month.

The money will funnel through the state down to Henry, King and Queen, Lancaster, Nelson, Patrick, Pittsylvania and Russell counties as well as Newport News, Richmond and Williamsburg. More localities may be added later.

The FEMA money awarded to Virginia will “provide reimbursement for up to 75 percent of local and state costs incurred as the commonwealth prepared for and responded to the storm,” the governor’s office said in a statement.

Based on the latest estimates, that works out to a federal check for $32 million of the $43.4 million the state spent. The cost of the storm was initially estimated at $60 million but that was revised down when the storm largely missed Virginia and the state was able to divert resources to harder hit areas to the south.

Still, the state spent just under $32 million preparing emergency shelters at Christopher Newport University and William & Mary and $1.2 million to contract buses to evacuate residents from Hampton Roads, which had areas most prone to flooding under mandatory evacuation orders.

“Virginia has been working closely with the president and the Federal Emergency Management Agency in order to coordinate our response to Hurricane Florence and to seek disaster aid to offset the cost of preparing for and responding to this historic storm,” Gov. Ralph Northam said in a statement.

“The award of these funds will allow the commonwealth to complete our recovery efforts and will help local and state governments to pay for the costs incurred from storm damage and response operations.”

While lawmakers have stressed that they don’t want to second-guess the state’s response to a storm that only narrowly missed the state, they’ve also questioned the expenditures, particularly the $32 million on shelters.
“Many are just scratching their heads as to how we got to this dollar amount,” said Del. Chris Jones, R-Suffolk, the chair of the House budget committee, on Monday.

Northam’s secretary of finance, Aubrey Layne, told the committee that the administration felt it had to establish shelters to augment the capacity of local facilities after Northam issued a first-of-its-kind mandatory evacuation order for more than 200,000 people in parts of Hampton Roads.

Complicating matters, he said, was the fact that the state’s existing contractor for shelters told officials it would take them 72 hours to activate.
Emergency planners said they needed the shelters ready in 36 hours, prompting them to make an emergency award to a Texas company that required payment for a full week’s worth of supplies.
“You have to remember,” Layne said, “We were dead in the middle of what looked like it was going to be a catastrophic impact for Virginia.”

FEMA will not provide individual assistance for Hurricane Florence, meaning people whose property was damaged will not be able to file a claim to receive money for damaged property or items.

Florence hasn’t been the costliest storm to hit Virginia in modern times: Hurricane Isabel in 2003 cost the state $66 million, even with FEMA assistance.

Correction: An earlier version of this story misstated the total spent by the state responding to the storm. 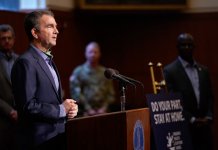 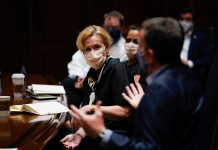