A filing last month by Virginia Republicans, part of an attempt to defend their pick for a “special master” to help a federal court redraw 11 House of Delegates districts ruled to be racially gerrymandered, contained a striking passage.

“Drawing voters together on the basis of party renders larger number of voters, both Democratic and Republican, happy with their representative,” the Republicans wrote.

The filing came in response to objections filed by Democrats about the qualifications of one of the GOP-proposed special masters: Thomas Brunell, a professor of political science at the University of Texas at Dallas.

Brunell, you see, wrote a book in 2008 called “Redistricting and Representation: Why Competitive Elections are Bad for America.”

Democrats say that book, in addition to the fact that Brunell was identified as a possible expert witness and submitted an amicus brief on behalf of Republicans in the legal challenge to the House districts, made him a bad fit to redraw the district lines.

But I was more intrigued by the notion that voting districts should favor one party or the other in order to please a plurality of voters and make things easy on lawmakers, who then, one supposes, are freed from the old-fashioned notion of representing everyone, even the people who didn’t vote for them, and making any attempts at compromise.

By that logic, we should be living in an electoral utopia.

As FairVote, a nonpartisan electoral reform group based in Maryland, notes, congressional districts have been steadily becoming less competitive.

Despite (actually, more likely because of) that triumph of partisan gerrymandering, by and large, we all hate Congress, with a Gallup from last month finding that nearly 76 percent of Americans disapprove of the “way Congress is handling its job.”

And while Americans tend to hold more charitable views of their own representatives than Congress as a whole, that’s another symptom of the problem.

Congressional gridlock and the inability to fix big problems, which many Americans claim to deplore, is fueled in part by gerrymandered districts in which incumbents fear reaching across the aisle, worrying more about primary challenges than appealing to a broad swath of voters.

And, too often, partisan gerrymandering means that the roughly 42 percent of Americans who identify as independents are stuck with choosing between candidates they don’t really like on Election Day.

This fall, to win control of Congress, Democrats hope to ride a “blue wave” of resentment directed at President Donald Trump — whose election in 2016 could be seen as the ultimate measure of voter disgust with our current system, both by those who saw him as a “human hand grenade” to throw at Washington or those who just stayed home .

Just four of Virginia’s seven Republican-held House of Representatives seats are considered within reach for Democratic challengers in a state that hasn’t elected a Republican statewide since 2009.

And one of those, the 5th Congressional District, is seen as something of a longshot for the Democratic candidate, Leslie Cockburn.

Of the other three, only one, the Northern Virginia race between incumbent Republican Barbara Comstock and Democratic State. Sen. Jennifer Wexton, seems to clearly favor the Democrat. The others are currently rated as “toss-ups” by the University of Virginia Center for Politics.

Virginia’s four Democratic incumbents are likewise shielded in safe districts from Republican challengers, if they have them. U.S. Rep. Bobby Scott, the Democratic 3rd District congressman, is running unopposed.

It’s easy to blame gerrymandering for the all of the ills of our political system, but the truth may be more complicated. Our increasing individual polarization and self-sorting into ideologically aligned communities could be as much to blame, especially given the deepening political divide between Virginia’s urban and rural areas.

Indeed, FairVote sees the main problem not as gerrymandering, but the fundamental nature of our winner-take-all districts. And that’s a problem that nonpartisan redistricting commissions, which Gov. Ralph Northam came out in support of last week, won’t fully fix, they say.

“Massachusetts Republicans haven’t elected a House member in more than two decades,” the group says. “Oklahoma Democrats are similarly shut out. Minor parties are nearly always shamed as ‘spoilers.’ One party can run the House even when the other earns more votes. In fair elections, those with the most votes should win the most seats, but every American deserves a fair share.”

Ranked-choice voting and multi-member districts, in which congressional districts get larger but elect multiple representatives based on the proportion of the vote they win, could be key to breaking through our current bitter dysfunction. Here’s an intriguing theoretical multi-member district map for Virginia.

U.S. Rep. Don Beyer, a Democrat who represents Northern Virginia’s 8th District, introduced a bill last year that would establish ranked-choice voting and multi-member districts in every state with more than one congressional district.

And it’s an issue that will be back in front of Virginia lawmakers next year after two ranked-choice bills were left in committee during the most recent General Assembly session.

Among the key advantages to ranked-choice voting, in which voters list candidates in order of preference instead of selecting just one, is the need for candidates to strive for broad appeal, because they want to be a voter’s second choice if they can’t be first. Candidates for Minneapolis city races said it kept the campaign positive and encouraged voter turnout. Maine voters wanted it so badly they overruled their governor and legislature.

And if we’d had it already here in Virginia, it might have meant that Del. Nick Freitas, a Culpeper Republican, would be running against Democratic U.S. Sen. Tim Kaine instead of Corey Stewart.

Trying to put momentum behind initiatives that change how we vote might be tough in the 24-7 social media and cable news outrage machine that runs full throttle nowadays.

And it’s sure to face stiff headwinds from politicians of both parties who are just fine with the status quo. But it might be our best shot at breaking the vicious cycle of resentment and retribution that seems to increasingly characterize our ever-more toxic politics, elections and governance. 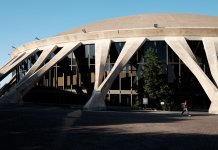 Amid tech advances, say ‘yes’ to due process