A friend was giving him a ride to work at a fast food restaurant in Hanover County when a sheriff’s deputy pulled them over to investigate whether the car’s window tint violated state law.

The officer asked to search them. Sure, he said, totally forgetting the burnt end of a joint in his pants pocket from days ago.

“Long story short, yeah, I had a tiny clip of weed on me,” said the man, 20, on his way out of the courthouse in Hanover County.

Because his trial on misdemeanor possession charges has not yet taken place, he spoke on the condition that his name not be used. Under state law, he faces a six-month suspension of his driver’s license and up to $800 in fines.

Hanover County stands out for having one of the higher arrest rates for marijuana of any locality in the state. But it’s hardly alone in Virginia, where law enforcement agencies are busting a record number of people with pot.

Arrests statewide spiked 20 percent last year to their highest levels in a decade, according to data provided by the state’s Department of Criminal Justice Services.

The trend might seem to run counter to moves toward the drug’s legalization in other states and softening public opinion nationwide. But to groups on both sides of the criminal justice system, those changes elsewhere might actually explain what’s happening in Virginia.

“My unscientific explanation for this dramatic increase is people are just brazen about it now,” said Dave Albo, a former state delegate and lawyer in Northern Virginia who often represents clients on possession of marijuana charges. “They just don’t think of it as illegal, so they’re more apt to carry it around in their pocket, more apt to have it in their car and more apt to sit and smoke it with their friends.”

Police seem to agree, saying it’s easier to get weed than ever.

“It’s more accessible. It really is,” said Stafford County Sheriff’s Office Sgt. Rob Grella, who works on narcotics investigations. “And with surrounding jurisdictions starting to decriminalize a lot of it and people thinking it’s more socially acceptable … they bring it home with them to Virginia.”

Marijuana arrests had been trending downward earlier in the decade, prompting some to question whether police were starting to take a more relaxed approach to marijuana enforcement.

The surge far outpaces all other drug arrests the state tracks except for meth, which went up 22 percent to 2,063 total arrests.

Other kinds of crime – robberies, rapes, burglaries and thefts – continue to trend downward.

Indeed, there’s no obvious geographic pattern behind the change: While arrests are up in most localities, in others they’ve gone down slightly.

In Rockbridge County, nestled in the Shenandoah Valley, the arrest rate climbed 35 percent last year to become the fifth highest in the state. Officers said they didn’t know why the numbers might be going up and said it wasn’t something they’d noticed in their day-to-day work.

“I’m not sure if Virginia citizens think that because it’s becoming legal in other states that it’s OK to do it here, but here in Virginia, it’s still illegal and we still enforce it,” said Chief Deputy Tony McFaddin.

In Hanover County, which has the 13th highest marijuana arrest rate, officers offered a similar account: “If we see it, obviously we do something about it,” said Sgt. James Cooper. But he said their approach or practices haven’t changed in the past few years. “It’s just always been that if it’s against the law and we come across it, obviously we’re going to enforce it.”

Not everyone buys the explanation that the increase in arrests is a simple function of an increase in users or users being less cautious or clandestine than in the past.

Jon Gettman, a professor of criminal justice at Shenandoah University in Winchester who has worked with pro-marijuana groups in the past, thinks it’s a simple function of increased police enforcement in general, and particularly in minority communities.

For one, national surveys haven’t shown an increase in marijuana users in Virginia, he said.

“I’m concerned it’s a reaction to marijuana legalization around the country, as if law enforcement wants to make a point that it’s still illegal here,” he said.

An analysis of statewide court data by the Daily Press in Newport News earlier this year found that black residents are twice as likely to be charged with possession of marijuana. That’s despite health surveys showing white residents use the drug at the same rate as black residents.

The review found that black residents are also more likely to face stiffer sentences than white residents when they get to court.

Gettman says he doesn’t think police officers are actively trying to target black people instead of white people. Instead, he says “the areas where they are most active are in minority communities, and, in fairness to police, there are reasons why they have greater presence there. It’s because the residents are victimized by crime at greater rates.”

But the effect, he argued, is the same.

“I see it as the police are opportunistically making more marijuana arrests. And I say this with great respect for what the police do and the jobs that they have, but they do have a lot of discretion in this area and the fact is they are continually arresting more people for pot.”

For at least five years running, statewide polls have shown that a majority of Virginian’s support decriminalization.

The most recent, conducted earlier this year by the Wason Center for Public Policy at Christopher Newport University, found that 76 percent of residents favor making the possession of small amounts of marijuana punishable by a fine. The survey didn’t ask about the legalization of marijuana for recreational use.

So far, the General Assembly has declined to act, despite supportive comments from Republicans and Democrats.

Ahead of this year’s General Assembly session, GOP leader Sen. Tommy Norment, R-James City, said he was open to decriminalization, but ultimately backtracked. Instead, he put forward legislation that would have eliminated jail time as a potential sentence for first-time marijuana offenders. It failed.

A spokesman told the Richmond Times-Dispatch that he decided against going for decriminalization “because it would have no chance of passage.”

$5 medical copays – equivalent to as much as 18 hours of labor behind bars – suspended at Va. prisons 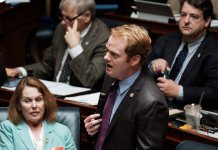 Is the bipartisan Fair Energy Bills Act facing its demise in...

Municipal building mass shooting is ‘most devastating day in the history...