For swimmers at Lake Anna, summer ended early this year.

The lake, located about an hour northwest of Richmond, has been home to algae blooms that can cause rashes and gastrointestinal illness, particularly in the northern Pamunkey and North Anna branches in Orange, Louisa and Spotsylvania counties. A bloom was also identified farther south, at Fisherman’s Cove just south of Lewiston.

The Virginia Department of Health issued an advisory in mid-August, warning people not to swim in the water where the blooms have been spotted because they pose a moderate to high risk for human health effects. It then updated that advisory on Aug. 31 to remind the public that the blooms are still occurring.

Though they’re referred to as harmful algae blooms, the organisms aren’t really true algae at all, said Margaret Smigo, waterborne hazards coordinator with the Department of Health. It’s actually cyanobacteria and, for reasons unknown to scientists, it releases toxins that can sicken humans and animals.

And Smigo said the sampling at Lake Anna has been remarkable for both the variety and numbers of the bacteria this year.

“We have some lakes where there are recurrent harmful algae blooms that we can count on them blooming,” Smigo said. “But we haven’t had a year where Lake Anna has had such a variety of different species, and we haven’t necessarily seen counts that are as high as we’ve seen this season.”

Cyanobacteria are found naturally in both fresh and marine waters, especially in warmer temperatures, but they bloom when there are plenty of nutrients in the water for them to eat.

The bacteria has been found in Lake Anna before, Smigo said.

“It’s just that for whatever reason the conditions are such that there are cyanobacteria that are outcompeting other algae that are there, and because of those conditions it’s flourishing,” she said.

Climate change might increase the frequency and occurrence of harmful algae blooms, according to the Centers for Disease Control and Prevention. In Lake Erie, for example, rising temperatures have caused larger blooms that last longer, into early winter.

Because Lake Anna was originally created to cool the waters coming from Dominion Energy’s North Anna Power Station, some parts are especially warm.

However, Smigo said she doesn’t suspect the cyanobacteria blooms in Lake Anna are caused by the nuclear power plant, in part because the blooms are happening in the northern parts of the lake, away from the power station.

The Department of Health has directed algae bloom reports near the power station to Dominion.

Coming into contact with cyanobacteria can cause symptoms that range from skin or respiratory irritation to gastrointestinal problems, and sometimes it can cause liver or kidney damage, said Todd Egerton, marine scientist supervisor with the Department of Health. The bacteria can also cause liver failure — and sometimes death — in animals like coyotes, birds or dogs that swim or drink the water.

Smigo said there have been some reports of illness related to the Lake Anna blooms, but she could not say how many because they were referred to local health departments. It’s also difficult to pinpoint the exact cause of waterborne illnesses, she added, in part because the symptoms caused by cyanobacteria could also be caused by other unrelated factors.

“It would be very difficult to tie a health complaint to any natural water body in part because water changes so quickly in a natural environment,” she said. “You have other viruses and bacteria in the environment because it’s not a sterile water body. … We know that there is a certain amount of health concern in natural water anyways.”

It’s not clear what’s caused the blooms in Lake Anna, Smigo said. Essentially, if there is an ample food source for the bacteria, a bloom will occur. So a large amount of fertilizer runoff or perhaps the vast amount of rain this summer might have something to do with it.

The state is warning people to stay away from the blooms and to avoid swimming or any other type of water recreation in those areas. It has also made a map so people can see where exactly the blooms are occurring. 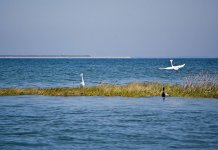 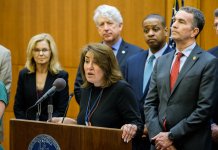