Attorney General Mark Herring said in an opinion Tuesday that a plan approved last month by the Lee County School Board to arm teachers is unlawful.

“For five years in a row the General Assembly rejected specific proposals to arm teachers, so there’s really no ambiguity,” Herring said in a statement.

In an effort to get around state law banning anyone but current or retired law enforcement from carrying guns, the School Board’s unanimously approved proposal called for having the teachers designated as special conservators of the peace.

The school district is the first and only in Virginia so far to pursue a plan to arm teachers, a controversial approach to school security that is legal in at least 15 other states.

“The law already provides several options for employing armed security personnel with full law enforcement training, but the law doesn’t allow for the arming of unqualified personnel, and for good reason,” Herring said. “The introduction of unqualified personnel with guns raises the likelihood of a tragic accident, or potentially catastrophic confusion during an emergency. That’s why the overwhelming majority of teachers — those who know the school environment best — oppose arming teachers.”

Herring’s opinion is only advisory, but it was requested by the Department of Criminal Justice Services, which licenses special conservators of the peace. And Herring’s opinion specifically directs the department that it would be unlawful to provide the licenses to Lee County’s teachers.

School officials say they’re reviewing the opinion, but don’t think it necessarily precludes them from pursuing their original plan.

“We’re going to go back and talk to our attorneys and see how they think we should proceed,” said School Board member Rob Hines, a Jonesville lawyer. “The way we intended to proceed was to get these licenses, but there are some that have the opinion that there are ways to proceed without them.”

Meanwhile, a spokeswoman for Herring, Charlotte Gomer, was unequivocal about the impact of the opinion: “Yes the opinion shows why Lee County’s plan is illegal and can’t move forward.” 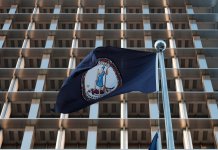 $5 medical copays – equivalent to as much as 18 hours of labor behind bars – suspended at Va. prisons