A watchdog group with federal investigative authority says it is continuing to probe allegations of abuse made by immigrant teens held in a juvenile jail outside of Staunton. A report released Monday by state officials failed to substantiate the claims.

“Based on what we know so far, we believe further investigation may be needed,” said Colleen Miller, the director of the Henrico-based disAbility Law Center of Virginia, which has access to the facility under federal law aimed at protecting and advocating for the disabled.

The organization has visited the Shenandoah Valley Juvenile Center three times since late June, when the Associated Press reported that a group of teenagers detained by the federal government had sued the facility, alleging they were beaten by guards, locked alone in cells for hours and strapped to chairs. The lawsuit was filed in 2017 by the Washington, D.C., law firm Wiley Rein and the Washington Lawyers Committee for Civil Rights and Urban Affairs.

Miller said the disAbility Law Center has been granted greater access to the facility than state investigators, who wrote that they found no “life, health, or safety concerns” nor evidence of abuse in a report released this week.

“One significant difference between the visits by (the Department of Juvenile Justice) is that we had unaccompanied access to the residents,” she said.

Advocates for the immigrant teens criticized the state’s review, which was limited to the facility’s current conditions and did not investigate past allegations of abuse, as flawed and superficial.

“Can you imagine being a child and being asked about how you’re being treated and having the people responsible for that treatment sitting there with you?” said Hannah Lieberman, the legal director of the Washington Lawyers’ Committee.

“I think that’s a serious, serious impediment toward any meaningful information gathering.”

Gov. Ralph Northam ordered the review the day the abuse allegations were first reported by the Associated Press, and according to the report, state investigators visited the facility later that same day and again four days later.

But their access to the youth and records about their treatment and care was limited. According to the report, that’s because the immigrant teens are being held in the facility through a contract between the local facility and the federal Office of Refugee Resettlement.

The state investigators were only allowed to speak to the detainees in the presence of a jail staff member. They were also denied access to copies of case files and weren’t allowed to keep written notes.

Three of 18 residents interviewed did report that they experienced abusive behavior, according to the report. Child Protective Services investigated two of them, the report says, but found they “did not meet the legal definition of abuse and neglect.”

State investigators did not interview any of the immigrant teens who made the initial complaint. When asked why, the Department of Juvenile Justice said it’s because they were no longer in the facility and seeking them out would have been outside the scope of the review.

The agency also failed to contact lawyers involved in the class action suit, nor did it consider the evidence the case produced, the Washington Lawyers Committee said in a statement.

The review did confirm that the jail uses restraints, including a chair that children are strapped to and hoods that can be placed over their heads to protect guards against spitting and biting.

None of the residents interviewed said they had “knowledge of the use of the restraint chair,” but “in two instances reviewed, staff were disciplined for using an unapproved physical restraint technique.”

While the review didn’t touch on the validity of past allegations, the facility’s leaders treated it as a vindication of sorts, saying in a statement that it “confirms our long-standing dedication to being a well-run facility that treats our residents with respect and dignity.”

The review made a number of recommendations for the facility, including that they train staff to work with children who have suffered trauma, re-train staff in the use of physical restraints, and “increase the staff’s understanding of and sensitivity toward the unique cultural backgrounds of the youth in the federal program, expand the culturally relevant programming for these youth and increase the number of bilingual staff.”

They also made two recommendations for the state Board of Juvenile Justice — one to guarantee state access to federal detainees and another to consider changes in the use of physical restraints.

Jennifer Woolard, the chair of the board, said they will take up both at their meeting next month.

Lieberman, the lawyer representing the teens, called the recommendations more telling than the report itself.

“It speaks to a lack of something that is core to the responsibilities of a facility like this,” she said.

The lawsuit that sparked the review is set for trial in early December. She said the state’s review doesn’t reflect the likely outcome of the trial because they considered two completely different legal standards. The state, she said, didn’t find any evidence of abuse or neglect as defined under Virginia law. The lawsuit, meanwhile, challenges the constitutionality of the conditions of confinement the youths faced as civil detainees.

“In lay terms, the standard is whether the treatment falls below the established standard of professional judgement,” she said. 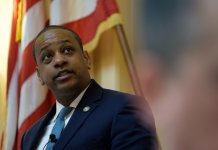